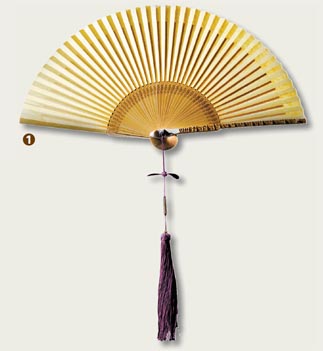 1 - Hapjuk-seon is a fan with spokes. The fan in the photo is decorated with turtle shell.

Our ancestors did not have anything but fans to keep themselves cool in the summer. Still, it is not difficult to find people fanning themselves on the street under the scorching sun.

However, the fans that are made by master craftsmen from Damyang, South Jeolla, and Jeonju, North Jeolla, can be much more expensive and are still received as great pieces of art.

For example, the yellow lacquered bamboo fan made by Lee Gi-dong, the master of masters in fan making, sold for up to 20 million won on the market. The fan is very big, 120 centimeters in width and 80 centimeters long, and was lacquered with yellow dye drawn from the sap of the Japanese Angelica tree, which gives the fan a life of more than 1,000 years. The fan is painted with very intricate designs of bats and apricot blossoms.

The idea of fans as expensive art is nothing new. In the Joseon Dynasty (1392-1910), even the cheapest fans with spokes made of double slips of bamboo were worth approximately 90 kilograms of white rice.

These fans were often decorated with poetry that was juxtaposed with a painting or image and, depending on who wrote the poem on the fan, who decorated it and what kind of materials were used, the price could skyrocket even further.

In the Joseon Dynasty, fans were also regarded as a status symbol. The classical scholars never went out without a fan. They would also use the fan to beat out a rhythm when they recited poems or sang pansori (traditional Korean narrative songs). And when they were embarrassed or in a socially awkward situation, they had an easy escape: They simply hid their faces behind their fan. 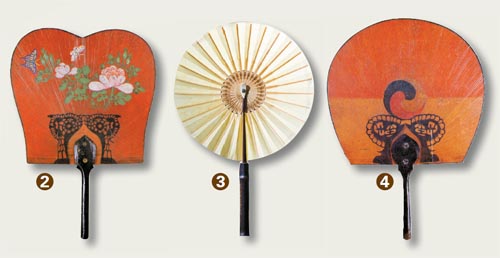 2 - Mi-seon is a Dan-seon fan, the basic type of Korean fan. It gets its name from its shape, which resembles a fish tail and is written as “mi” in Chinese characters.
3 - Yun-seon is a round 360-degree fan that served more as a sunshade rather than a fan.
4 - The Taeguk-seon fan has a Taeguk pattern. By Eom Jae-su, the son of Eom Ju-won, who holds the title of Intangible Cultural Property for fan craft


The yangban, or aristocratic class, would adorn their fans with precious stones such as gold, silver, jade and amber, and the royal family owned fans large enough to accommodate 50 spokes. Of course, most people could not afford such large and luxurious fans, nor were they allowed to do so. Certain kinds of fans were reserved only for the royal family and the nobility could own fans with less than 40 spokes. Ordinary people had to put less spokes on their fans.

Women usually had fans with a handle and a wide, flat area at the top. They used the fan for various purposes, such as to light a fire, to sit on in the field or to sort through grains, as well as to cool themselves in the summer.

Members of the royal family and gisaeng courtesans owned the same types of fans men used. For them, the fan was a fashionable must-have accessory.