Summer escape between the stacks

Summer escape between the stacks 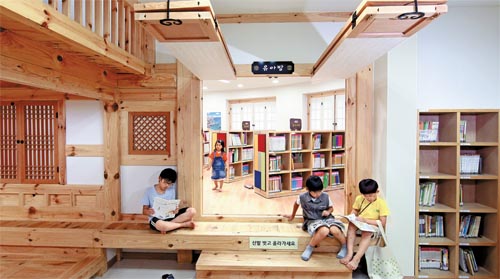 Children take time to read their favorite books at Sanbon Library, a hanok library in Gupo, Gyeonggi, on a recent lazy summer afternoon. By Kim Sang-seon


Summer is a good season to catch up on your reading, especially with the beaches beckoning families to vacations along the shore. Children in particular relish the opportunity to read books they are interested in, rather than the textbooks and other materials they are assigned to read throughout the semester. But if you don’t have time for a vacation, there are plenty of libraries in the capital region that provide enough activity to make you feel as though you’ve gotten out of town - even if just for a day.

Walking into Sanbon Library in Sanbon-dong, Gupo, Gyeonggi, is like stepping back in time. The library, a traditional Korean hanok that has a special reading room in its attic, has spokes on the windows that are modeled on those at Haein Temple in South Gyeongsang, which houses the Buddhist scriptures of the 13th-century Tripitaka Koreana.

“The attic is definitely everyone’s favorite place, especially with children,” said Chang Seong-su, a librarian at Sanbon Library. “Most city children grow up in apartment complexes these days and they find it amazing that there is this small room upstairs.”

One young visitor to the library that day agreed.

“This area by the window made of hanji [traditional Korean paper] is my favorite place,” said Seo Ji-hyun, a fifth-grader at Sinheung Elementary School, who said she comes to the library every weekend. “It’s where I always choose to read whenever I come here - it feels like I’m at my grandma’s place.”

Experts say that being in a hanok has the same effect as a therapeutic walk in the woods because it is made of pine trees, which makes it a good place for children to learn about traditional Korean housing.

The library has about 5,000 English books in its collection for children in preschool to sixth grade. For the coming summer vacation, the library plans to run a “summer reading school” for fourth-graders starting the end of this month. The library is open to the public, but only Gunpo citizens are allowed to check out books. For more information, call (031) 395-4316 or visit www.gunpolib.or.kr.

There are two other hanok libraries in the country - Gwansan Library in Ansan, Gyeonggi, and Hyeonam Library in Yeosu, South Gyeongsang. In Seoul, there is a hanok library under construction in Gaebong-dong, Guro District. It will be completed in October. 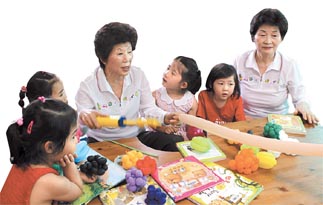 Gilkot Library, located in Banghwa-dong, Gangseo District, western Seoul, is a place bustling with the energy of generations. Here, elderly ladies read storybooks to children every Tuesday, and on Saturdays a group of 10 elderly people over 60 teaches children how to play 12 traditional Korean games, including stick-tossing and hoop-rolling.

The instructors are not your average grandma and grandpa next door, but are experts who have completed training courses in teaching reading and traditional games to children.

“In this era, where there is less communication between the younger and older generation, we wanted to have classes where children can learn traditional things from older people,” Kim Dong-woon, the head of Gilkot Library, said. “I believe our classes will also help children from multicultural families learn about traditional Korean culture.”

The library has about 20,000 books for children in elementary school and younger. Residents outside Gangseo District can also borrow books from the library. For more information, call (02) 2663-4764 or visit http://lib.gangseo.seoul.kr. 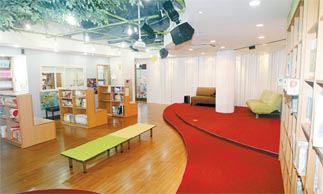 This library, which is located at Daegwang High School’s 60th Anniversary Hall in Sinseol-dong, Dongdaemun District, eastern Seoul, organizes performances catering to children on the second and fourth Saturdays of every month. A performance of “The Sound of Music” is scheduled for July 24. The performance has an audience participation element that invites children to sing along with the cast.

The library has side-by-side reading rooms for children and parents, stocked with thousands of books. Next to the entrance to the library is a “cafe” where visitors can bring their own food and have it inside.

The library, its lending service and programs including performances are open to everyone regardless of the region in which they live. For more information, call (02) 921-4085 or visit http://blog.naver.com/nhy1203. 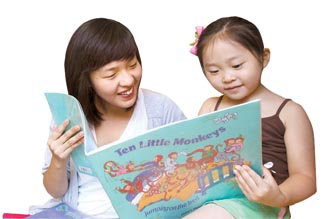 Songpa Children’s Library, which is located in Jamsil-dong, Songpa District, southeastern Seoul, is large for a children’s library and gets about 2,000 visitors per day.

One of the most popular programs is the “Book Buddy” program, which is administered with the help of about 260 high school and college students proficient in foreign languages. The students volunteer to read books to children in English, Japanese, Chinese and French at the library on Saturdays and Sundays from 9 a.m. to 6 p.m.

“The program has been well received by children and their parents,” said librarian Cho Geum-ju.

Besides having a substantial collection of books, the library is also known for its more than 20 regular cultural programs. These include movie screenings and a family movie festival. There are also special programs, including readings by well-known authors of children’s books. In the past, author Iwasaki Chihiro, the writer of “Toto by the Window,” and Emily Gravett, the writer of “Little Mouse’s Big Book of Fears,” have appeared as guests at the library.

All children living in Seoul are welcome at the library, which loans a maximum of five books per person. For more information, call (02) 418-0303 or visit www.spclib.or.kr.