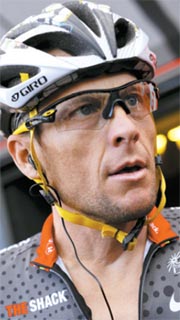 GAP, France - Lance Armstrong said Wednesday he is prepared to cooperate in a federal investigation into alleged doping fraud by his former team, U.S. Postal, as long as it does not become a “witch hunt.”

The cancer survivor and seven-time Tour de France champion has been hampered in this year’s race by a series of damning doping allegations leveled by former teammate Floyd Landis. Landis was stripped of his yellow jersey in 2006 after testing positive for testosterone and spent millions of dollars - and four years - trying to clear his name before confessing to doping two months ago.

Along with his confessions, however, were claims that Armstrong and several other riders on U.S. Postal were involved in systematic doping practices - allegations that Armstrong has denied. On Tuesday, the New York Times reported that U.S. authorities have issued grand jury subpoenas to potential witnesses in the probe. According to the Times report, the subpoenas demonstrate how seriously authorities are taking allegations made by Landis.

When asked to react to the report, Armstrong replied: “Like I said, as long as we have a legitimate and credible and fair investigation, we’ll be happy to cooperate, but I’m not going to participate in any kind of witch hunt. I’ve done too many good things for too many people.”

Accusations of doping have followed Armstrong throughout his career, although the American has never tested positive. He has questioned the credibility of Landis, mainly because the American lied for four years before confessing to “clear his conscience”.

“Would the American people feel like this is a good use of their tax dollars?” said Armstrong. “That’s for them to decide. I don’t think the government will build a case on Floyd Landis. His credibility left a long time ago.”

“As long as I live I will deny [the allegations],” he said. “There is absolutely no way I forced people, encouraged people, told people, helped people or facilitated” anything along these lines.

The federal investigation is being led by Jeff Novitzky, who led a successful probe into the BALCO doping affair resulting in a jail term for perjury for former sprinting queen Marion Jones.