An in-depth look at majestic mountains

An in-depth look at majestic mountains 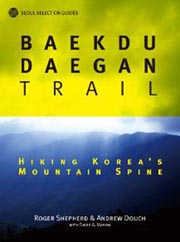 
Two New Zealanders spent 70 days fully immersing themselves in the rugged natural beauty of Korea, and now they’re hoping to share the region they explored with the rest of the English-speaking world.

Roger Shepherd and Andrew Douch wrote a guidebook called “Baekdudaegan Trail: Hiking Korea’s Mountain Spine” after a two-month trek as part of an effort to make the area more accessible to people from around the world. The book, released earlier this month, covers an area that stretches from Mount Paektu in the northern region of the Korean Peninsula to Mount Jiri in the south.

“I wanted to become the first foreigner to introduce this precious asset of Korea to the world,” Shepherd said.

Seoul Selection, the publisher of the book, held a press conference this week so that Shepherd could share his experiences writing the guidebook and talk about the inspiration behind it. Shepherd said he first realized the need for a detailed Baekdudaegan guidebook written in English after hearing about the area from his friend Douch, who was already living in Korea, during a visit here in 2006.

Shepherd and Douch then cemented plans to walk the mountain range in 2007 to form the basis of the book.

The 452-page guidebook - written to appeal to hikers of all skill levels - breaks down the 735-kilometer (457 miles) swath of mountainous territory into 17 regional sections and then further divides those areas into segments that can be hiked in a day.

Each section contains basic information on transportation, lodging and GPS coordinates as well as useful tips such as where to find water.

The guidebook vividly portrays the historical, cultural and ecological importance of the mountain range via 200 pictures of everything from religious artifacts to breathtaking views of the sunrise from the top of towering peaks.

After finishing the trek, Shepherd and Douch became convinced that Baekdudaegan could become as world-renowned as the Appalachian Mountains in the United States.

“Waves and waves of blue mountains are the uniqueness of Korean mountains. If I were to be dumped out of airplane and land on top of any mountain, I could definitely tell if I were on one of the Korean mountains or not,” Shepherd said at the press conference last Tuesday.

Aside from listing detailed information about the trail, the authors also wanted to expand the scope of the book to include routes to nearby local villages so that foreigners can get a feel for rural Korean life.

“One time we got a big jar of walnuts from the locals. That became a very useful source of food for us as we continued our 70-day hike,” Shepherd said.

In the course of translating their experiences on the trail into a guidebook, Shepherd and Douch employed the help of professor David Mason of Kyung Hee University, an expert on Korean mountains, to round out and verify the information.

While Shepherd hopes the guidebook can turn people on to the beauty of Korea and of this particular mountain range in general, his trek along Baekdudaegan has changed his life completely.

Early this year, he quit his job as a police officer and started work as an honorary ambassador for the Korea Tourism Organization. He’s currently traveling in Korea and hopes to relocate here. Shepherd plans to work on another book that is more focused on his experiences during the expedition.