A train with a view

A train with a view 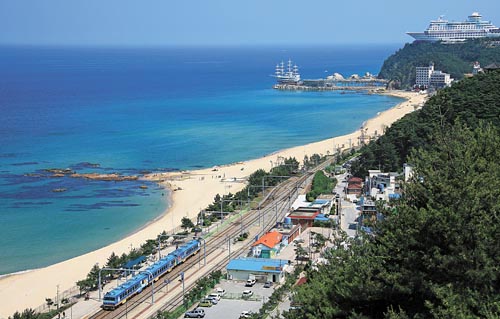 The Sea Train runs along the East Sea in Gangwon Province. The 80-minute journey includes breathtaking views of the coastline, which is one of the most beautiful in Korea. By Son Min-ho


Korea’s eastern coastline offers some of the most spectacular views of rocky cliffs and clear blue water in the nation. Although it is a popular route for summer road trips, a better way to see it is from a train designed with the passengers’ viewing pleasure in mind. All of the seats on the train are window seats facing the East Sea, ensuring that each and every passenger will have an amazing view. 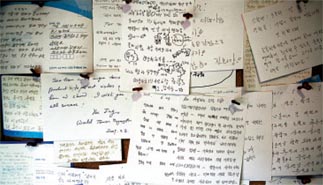 During the 80-minute Sea Train journey, passengers can request their favorite songs. The door of the D.J. booth is filled with notes from passengers saying why their requests should be played.

The Sea Train travels a 58-kilometer (36-mile) route between Samcheok and Gangneung stations along the coast in Gangwon Province. This stretch of track is part of the 200-kilometer Yeong-dong rail route, which links Yeongju, Gyeongbuk and Gangneung and is one of the most scenic train routes in the country.

The Sea Train started running in July 24, 2007, and it has since become one of the hottest attractions along the eastern coastline. Over the past three years, a total of 350,000 passengers have boarded the train.

The train trip was developed by Korea Railroad, or Korail, and three local communities. Korail contributed its passenger train service and the railroad. The three communities through which the train passes - Gangneung, Samcheok and Donghae - invested 300 million won ($249,304) each to modify an ordinary passenger car into one in which every seat faces the sea.

Inside the railcar, the walls are painted a bright ocean blue with decorations that almost make you believe you are in an undersea world.

One of the train’s more unusual features is the “proposal room,” which has been designed specifically for people hoping to win over their significant other with a marriage proposal like no other.


Music, at your request 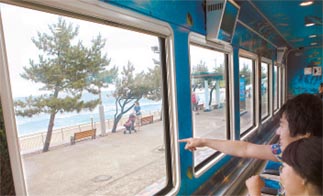 All of the seats on the train face the sea.

The Sea Train makes an 80-minute round trip between Samcheok and Gangneung stations six times per day. For 40 minutes of the journey passengers have a clear view of the sparkling blue sea.

The train makes one 10-minute stop at Jeongdongjin Station, which became a popular destination after it was featured on the TV drama “Hourglass.” Passengers can get off and take pictures or look around the station.

In addition to the panoramic view of the East Sea, the Sea Train also offers many other forms of entertainment. During the journey, the train crew provides information about the Gangneung and Samcheok regions.

They also play music, including passenger requests. Passengers can hear their favorite songs by sending a text message to the crew or handing a note to the D.J.

According to the Sea Train crew, they receive as many as 100 music requests from passengers between July and August, when ridership is at its highest. 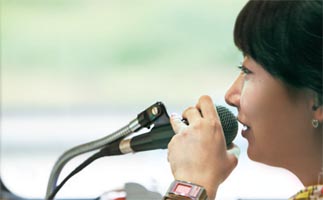 A crew member offers information about Samcheok and Gangneung, which are part of the Sea Train route.

The Sea Train departs from Gangneung Station three times per day and from Samcheok Station three times per day. A one-way trip in cars No. 1 and 2 costs 15,000 won per person and the cost for car No. 3 is 10,000 won per person. The marriage proposal room can be rented for 50,000 won. All tickets can be purchased online at www.korailtravel.com or directly at Samcheok, Donghae, Jeongdongjin and Gangneung stations.

Sea Train ticket holders are eligible for discounts of up to 50 percent from tourist attractions such as Ohjukheon in Gangneung or Samcheok Spa. Ohjukheon is the birthplace of the Joseon Dynasty scholar Yulgok (1536-1584). He is also well known as a son of artist and calligrapher Sin Saim-dang, who is featured on the new 50,000-won note.

Korail also offers a Sea Train travel package. It is a one-night, two-day trip that includes tickets for a ride on the Sea Train, passes for a trip on a Jeongseon rail bike and a walk at Yangdde Farm, which is located in the mountainous region of Daegwallyeong. The cost is 139,000 won per person. For more information, call 1544-7755 or visit www.korailtravel.com.