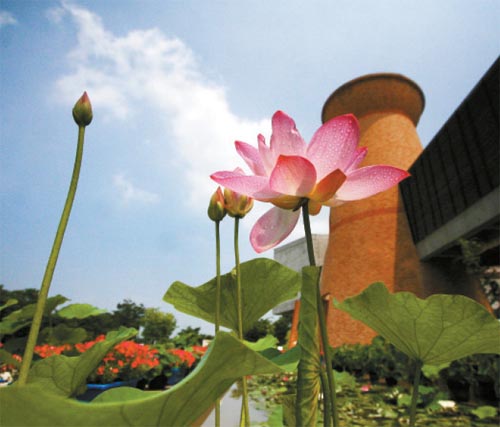 Lotus flowers from seeds estimated to be from the Goryeo Dynasty grow in a pond near Haman Museum in Haman County, South Gyeongsang. [YONHAP]

Lotus seeds have perhaps the longest lifespan among all living creatures on earth. It is known that lotus seeds can be preserved for as long as 10,000 years, which means that if you were to plant a lotus seed from 8,000 years ago, it would germinate and bloom into a beautiful flower.

This is not just possible in theory. On July 7, lotus seeds from the Goryeo Dynasty (918-1392) bloomed at a pond in front of the Haman Museum in South Gyeongsang.

The seeds, 10 in all, were discovered approximately four meters beneath a pond near Seongsan Fortress in Haman by Sung Jae-gi, the museum manager, last year on May 8. He had joined the excavation team specifically to look for the seeds.

“I dug about four meters down and the ground became so hard that even a shovel could not break it,” said Sung. “There probably wasn’t even enough space for oxygen to infiltrate that deep into the ground. That’s where I found the seeds. They were smaller than the ones we have now, so I knew on the spot that they were from a long time ago.”

He sent two of the seeds to the Korea Institute of Geoscience and Mineral Resources (Kigam) for carbon dating. He only sent two seeds, because the seeds have an extremely difficult time germinating after going through the carbon dating process.

Kigam concluded that the seeds are from the Goryeo Dynasty, even though Seongsan Fortress is a famous historic site from the Gaya Kingdom (42-562).

Lotuses take more than a year to bloom, and on July 7 one lotus finally bloomed, after 700 years of waiting.

When the morning sunlight reached the bud on the morning of July 7, it began to awake from its long hibernation, like Sleeping Beauty. In the warmth of the sun, one of the petals unfolded. Slowly, more petals spread out. As if it was shy about putting on such a display, the lotus took four hours to fully bloom. Still, four hours was nothing compared to the 700 years the seeds had waited in the dark and muddy ground.

The color of the lotus flower was a combination of red, pink and maroon, but it was not too showy.

Those who are interested in seeing these beautiful, graceful lotuses in person will not have to wait long.

“We are planning to breed a lot more lotuses of the same kind and to create a lotus park by December next year,” Sung said of his future plans. “Japan has a similar lotus park in Chiba, which they created from just three seeds. After a few years, many visitors will be able to enjoy a lake filled with these elegant and mystical lotuses.”