A hearty toast to makgeolli’s revival

A hearty toast to makgeolli’s revival 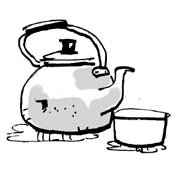 We Koreans half-jokingly say that alcohol runs in our blood. We joke that the “a” in adenine, a component of DNA, stands for alcohol for us. Ancient Chinese documents have also discussed our love for liquor. The chapter about the Buyeo Kingdom in the Records of the Three Kingdoms says: “People have a mass gathering in the middle of the kingdom and drink, eat, sing and dance day after day.” That was a description of a harvest ceremony. The word “drink” comes before the word “eat,” because for Koreans drinking is more important than eating.

Korea, China and Japan have different cultures when it comes to drinking and eating. The Chinese word for inn or hotel is “fandian,” a place for meals, which shows how important eating is for the Chinese. The Chinese eat fatty food to prevent their faces from getting windburned from the gales that blows in from the north. One of the best things to drink with a fatty food like pork is kaoling liquor. One takes a shot of the liquor and shouts “gan bei,” meaning “drain the cup.”

In Japan, drinking is less important and one gets drunk easily because the climate is hot and humid. That’s why people sip sake from a small cup. If the cup is emptied, it is refilled right away — which is probably done to prevent people from downing a larger glass of liquor and getting really drunk.

Koreans drink makgeolli, unrefined rice wine, from a big bowl. The beverage is usually accompanied by chili peppers and cucumbers.

Korean poets have opined on the taste of makgeolli, both in the literal and figurative sense, for years. The sentiment conjured by makgeolli is illustrated in the Korean poem “The Taste of Liquor” by Kim Ik-du: “In a tavern/ with few customers/ where the owner does not even think/ it would ever attract many./ Together with a bowl of leftover chili peppers/ I drink alone/ a gulp of makgeolli/ feeling the very taste of loneliness.”

In the “The Wanderer” by Park Mok-wol, a wanderer rests in a tavern: “In each village where the moon shines/ the sunset is a deep red/ Like a moon traveling over clouds/ a wanderer drifts.”

Makgeolli was once hard to find because of food shortages, and the government banned home-brewed liquor. Recently, however, it has made a marvelous comeback. But only 13.6 percent of the rice used to make makgeolli is grown domestically. The rest is cheap imported rice or wheat.

These days, the country’s rice supply is bigger than the demand, so the government is working on a plan to use rice as food for stock animals. If that is true, I think it would be better to lower rice prices and encourage makgeolli producers to use domestic rice. Makgeolli made from Korean rice is not only good for our health, it is good for our cultural and historical memory, and I raise a glass to its return.