Ticket Monster takes off, and so does its owner

Ticket Monster takes off, and so does its owner 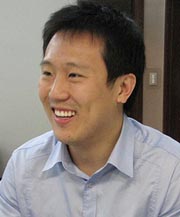 When Hyun-sung Daniel Shin, 24, landed at Incheon Airport in January he did not speak fluent Korean and he did not have a job. All he had with him was a business plan. Within seven months, however, he had become a successful entrepreneur.

Shin is the CEO of Ticket Monster, a new online company that is taking the business world by storm.

Ticket Monster’s business model is based on social commerce, which uses social media to facilitate the buying and selling of products and services online.

Each day, the company features an item called a Tmon, which includes services from restaurants, cafes, spas and hair salons. Customers who sign up for the Tmon of the day agree to buy it at a 50 percent discount - but only if a predetermined number of people, set by Ticket Monster, also sign up for the deal. If the quota is met, everyone gets the discount, but if not, no one does.

It is attractive to retailers because they are guaranteed a certain number of buyers when the quota is met, and it is appealing to customers for the discount on popular services.

“Tmon makes it easier for people to enjoy great items in their community by only paying the half of the original price through the power of group buying,” said Shin.

One day, when the Tmon of the day was a Brazilian steak at a celebrated restaurant, about 4,000 people signed up for the Tmon. The quota for the deal was just 100 people and the deal was an overwhelming success.

When on another day the Tmon was a gym membership, however, the quota of 100 people was not even close to being met.

That prompted Ticket Monster to restructure its system to give customers more deals in their region. Currently, there are two Tmon offered in Seoul, one in Bundang and one in Busan. By end of this year, however, the company plans to further divide Seoul into five regions and there will be 12 regions for the rest of the country.

Shin’s passion for business developed when he was a senior at the University of Pennsylvania. That year, he launched a business that mediates between Web site banner providers and users. It has recently been sold to Google.

After college, he got a job at McKinsey & Company, the global management consulting firm.

“Most graduates from UPenn’s Wharton School of Business either go into consulting or investment banking,” Shin said. “I chose consulting because I was less interested in analyzing and calculating numbers and wanted to learn more about management, which cannot be learned from a book.”

He also thought the experience would help him run his own business someday.

“The key is how well you lead your employees and whether you are able to create an environment within the corporation in which they feel like they are running their own business,” he said.

However, he soon realized he needed to go back to doing what he loved.

“I want to enjoy what I do,” Shin said. “And I realized that in order to do that, I needed to start something of my own.”

When he told his McKinsey colleagues that he wanted to take two months off to plan his own business, they encouraged him.

“They even told me to do well so I could one day become one of their clients,” he said.

Starting a business in Korea was tough for Shin, who was born and raised in Korea but moved to the U.S. when he was 9.

“It was difficult explaining my business model,” Shin said. “I didn’t even know the Korean words for basic business terms such as payment and sales.”

Shin started with five employees. He now has 27.

Still, it is a relatively small company, which means that he has more freedom to run the business as he sees fit. He has also established an internship program for college students and recent graduates, to teach young business leaders and help expand his operations.

“I wanted to give more chances to people,” Shin said. “A company cannot exist without people. Employees are not just part of a giant machine, but have the power to build and lead the company.”

When he first came back to Korea, Shin told his parents, who had not been thrilled about his new business venture at first, that he would go back to the corporate world if he failed to establish his firm by July.

But now, he has become so successful that he is regularly invited to speak at seminars on social commerce.

“Last Tuesday, 300 people filled the seminar room,” Shin said. “Presenting my view in front of that many people just doesn’t compare to anything else I have done so far.”