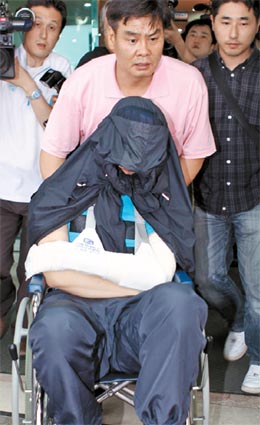 A man arrested for the rape of a 7-year-old child in Dongdaemun last month surnamed Yang, 25, is pushed in a wheelchair from a hospital in Jeju Island to be flown to Seoul, yesterday. Police said Yang tried to commit suicide by slitting his left wrist on Thursday after he felt police were closing in on him. [YONHAP]

The alleged rapist of a 7-year-old Vietnamese girl yesterday was flown to Seoul from Jeju, where police arrested him Thursday, 20 days after the rape and after letting him give them the slip in Seoul Wednesday.

Police said the suspect, surnamed Yang, is a 25-year-old waiter in a hostess bar. He was tracked down to a hospital in Jeju Thursday night where he was recovering from self-inflicted wounds on one of his wrists, which a doctor said were not life-threatening.

He is accused of bringing a 7-year-old Vietnamese girl to her empty home in Dongdaemun, Seoul, on June 26 and raping her before escaping with jewelry and petty cash. The girl’s parents were working at the time.

Police said they pinpointed Yang, who lives in Dongdaemun, as their main suspect after seeing him on CCTV footage in the neighborhood in early July and comparing the image with a police sketch based on the rape victim’s testimony.

“We tried to narrow down his location from camera footage and data from communication towers,” Officer Hong Jung-hyeon of the Dongdaemun precinct said yesterday. Police deduced that Yang was familiar with the neighborhood, and lived in a friend’s house near the victim’s residence.

Police eventually tracked Yang to the friend’s apartment, where they overheard a man and a woman talking with the door open.

When Yang came out of the apartment, Officer Choi Byeong-il, who was waiting outside with two other officers, showed him a grab from the CCTV footage and said: “This is you, right?” Police asked for a mouth swab sample, which Yang gave, took his picture and left.

“I had a feeling it was him, but I wasn’t sure,” said Choi. Yang was 10 centimeters taller than the police estimate from the footage, which was 173 centimeters.

After comparing the swab with DNA samples from the rape scene, Yang was confirmed as the rapist Thursday. But police found he had flown to Jeju, his home province, with his parents at 12:30 p.m. Thursday

“The evidence was in our hands,” said Hong. “That’s when we requested assistance from Jeju police. Our team caught the last flight out to Jeju Island at 8:30 p.m.”

A group of 40 police officers on Jeju were dispatched to the airport and within an hour they discovered CCTV footage of Yang being pushed in a wheelchair.

After all hospitals and emergency rooms on the island were checked out, Yang was found hospitalized in Jeju City, receiving blood transfusions. He made no attempt to resist as Jeju police arrested him. Police said Yang tried to commit suicide by slitting his left wrist on Thursday after he felt police were closing in on him.