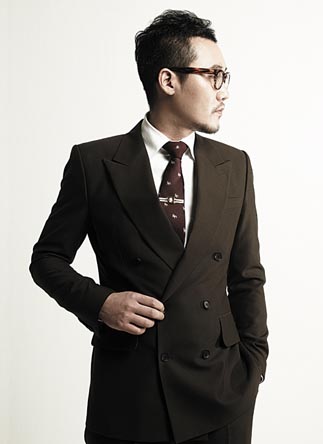 On Garosu-gil, one of the trendiest spots in southern Seoul, should you ascend to the second floor of a certain building that houses a dessert cafe, you would find a room strewn with men’s clothes.

Brown price tags dangle from everything from pique shirts to formal suits and coats, marking their cost in euros. Trendy lounge and pop tunes fill the smallish space decorated with large mirrors and classical-style chairs in one corner.

The clothes in the studio arrived fresh from Paris in late June, along with Kang, founder and chief executive officer of the brand.

There, the designer was one of 10 Korean designers handpicked by the Seoul Metropolitan Government earlier this year to receive state support to showcase their work at the Tranoi trade shows as part of a government effort to cultivate Korean fashion labels into globally recognized brands. One of the world’s most prestigious fashion trade shows, Tranoi is a meeting place for designers, international buyers and journalists.

Three menswear designers including Kang joined Tranoi Man, while the seven other designers, who specialize in women’s clothes, are scheduled to visit Paris for Tranoi Woman in October.

“It was great. I personally enjoy taking part in overseas fashion fairs. While shows in other fashionable spots like New York are relatively more casual and fun, Tranoi was formal and high-end,” Kang told the JoongAng Daily in his office.

Although the designer, who is in his early 30s, thinks his brand has taken root well in its home country, he wants to continue to show overseas. For him, targeting both the domestic and international markets concurrently is a smarter strategy - especially since critics have praised his suits for their sophisticated, urban vibe.

“Buyers don’t immediately buy clothes by a new designer just because they like them. Since building credit is a top priority in this business, it’s necessary to make them feel familiar with my clothes. Once they get accustomed to them, they will eventually start buying them,” he added.

Following the label’s debut in September 2006, D.Gnak by Kang.D hit the Las Vegas Capsule Show in February 2009 and is currently being shown at ENK New York, another fashion trade show that kicked off yesterday and lasts through Tuesday. The brand currently shares a showroom in New York with several other Korean brands including Beyond Closet by Tae Young.

Kang’s efforts seem to be bearing fruit. His diffusion line, D by D, is set to hit the mass market when it goes on sale at the U.S. chain Urban Outfitters in the fall.

The designer’s savvy approach probably comes from his business background: He earned an MBA from the state-run Korea Development Institute in 2006, just before launching his own brand. This came two years after he graduated from Parsons with a bachelor of fine arts degree.

“Staying in the U.S. doing internships after graduating from Parsons, I tried to launch a brand there. But businesspeople were talking in a language that was totally new to me. Then I realized I should get an MBA. I chose to attend KDI because it was the only school in Seoul that taught entirely in English and I missed home,” said Kang.

Clothes were an early passion for Kang. In elementary school, he squirreled away his pocket money so that he could shop for himself in Itaewon, which was a 40-minute walk from his home.

But as his shopping radius widened, he realized as a middle school student that he didn’t want to just buy the clothes he liked; he wanted to make them, too.

Although the designer says he wishes he could wear suits 365 days a year, real life simply doesn’t allow it. For this interview, he was clad in a simple T-shirt and jeans.

“I am in the middle of working my way up to raise my foothold, and I just can’t afford to wear suits when I’m at work,” he said, saying that they’re not very comfortable. “Honestly, I haven’t even shopped properly since I launched my business because looking at others’ designs kind of influences me in a bad way. I rarely see other designers’ collections, nor do I read fashion magazines.”

When asked about his favorite designers, he instead mentioned his role model: Diesel founder Renzo Rosso, who built a global fashion empire on the idea of selling premium distressed denim.

“When he started selling vintage denim at such high prices, everyone said he was crazy. But he pushed ahead with his initial plan and succeeded. Then he didn’t stop there but started investing in designers,” Kang said.

“It’s my ultimate goal to build a global design house one day like Rosso did and help my successors.”