A STRATEGY BEGINS TO FORM
How combat boots saved a life

Last week JoongAng Ilbo reporter Choi Moon-hwan remembered his time in 1950 as a recruit in the South Korean Army, under the command of Gen. Paik Sun-yup. 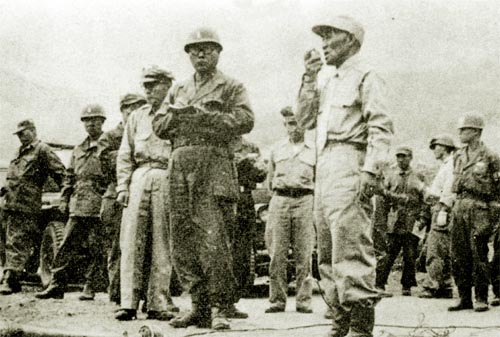 Shin Sung-mo, right, the minister of national defense at the time, addresses the crowd in Daegu at the height of the Dabudong Battle in mid-August of 1950. North Korean troops that had entered Gasansanseong Mountain Fortress had shelled Daegu Station. Cho Byung-ok, the home affairs minister at the time, took to the streets to win the hearts of the panic-stricken mass looking to flee Daegu. [JoonAng Ilbo]


On Aug. 18, 1950, as the situation in Dabudong continued to worsen, the ROK reinforcement troops, in addition to the American allies, came to our aid.

The first of the reinforcements was a battalion with the ROK Eighth Division 10th Regiment. They arrived at our command post at Dongmyeong Elementary School. It was roughly 5 p.m. when they arrived and they appeared to have traveled quite a distance.

At the time, enemy troops were entering the Gasansanseong Mountain Fortress area in the eastern ridge of the Dabudong front. Defending the area against enemy seizure was crucial since it provided a clear shot to shell Daegu. It was imperative that we ward off enemy incursions, and that is why the reinforcements had been sent to us.

Among the men with the battalion of the ROK Eighth Division was a familiar face. It was Maj. Kim Soon-ki. He had served under me during my tenure as the director of National Intelligence in 1948. The happiness of meeting a familiar face was short-lived. I noticed that the men looked severely fatigued.

“No, brigadier general, we haven’t had a chance yet,” replied Major Kim.

Major Kim and his men had marched from Yeongcheon, North Gyeongsang, without much rest and food. As men continued to arrive, it was evident the men were in poor shape. They appeared fatigued, thirsty and hungry.

We weren’t in a position to give these men a break, as we were in dire need of support on the front lines of Gasansanseong Mountain Fortress, but I could not bring myself to put these men under any further distress.

I proceeded to order my men to slaughter three pigs. First and foremost, I felt we needed to properly feed these men. Then we needed to give them some time to recuperate from their long trip. It was my thinking that only then could they be proficient in battle.

“Let’s give them some time to rest and then send them up early next morning,” I said to Moon Hyung-tae, one of the officers under my command. 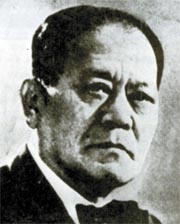 The sight of roasted pigs set off a festive atmosphere among the men. They seemed genuinely pleased with the heaping amount of food that was now available to them after a long and tiring march.

After their meal, the men of the ROK Eighth Division slept on the football field of Dongmyeong Elementary School with the knowledge that they would enter battle the following morning.

I was asleep in the night watchman’s room set aside for the faculty of the elementary school. I must have fallen asleep at around 11 p.m.

It’s unclear when, but I heard loud sounds of gunshots during my sleep along with a noisy commotion. At this time, Col. Kim Pan-kyu, an officer under my command at the time, scurried into my room shouting: “Brigadier general, we have trouble. We have enemy fire.”

For that brief moment, I had a hard time comprehending what Colonel Kim was saying. I could not fathom how the enemy could be bold enough to attempt an attack on a division command post. While thinking this, I got up and made my way out the room with my head down.

In the hallways, I saw our officers as well as American advisers crawling. I heard a combination of gunshots, machine gun fire and hand grenades detonating in the background. The enemy soldiers breaching the walls of the elementary school looked about the size of an average company.

“Soon-ki, Soon-ki, what are you doing?” I yelled. “Get your men ready and fire back. The enemy is over there.”

Colonel Kim did a good job directing his men, who had been sleeping on the football field of the school. Colonel Kim’s men worked efficiently to repulse the attack and forced the enemy to retreat in haste.

I found out after the fact, but the reason for the attack was to capture me alive. There was even a 100,000 North Korean won reward to do so. To give readers an idea of how large the sum was, 100 North Korean won at the time was enough to purchase a cow.

In retrospect, my habits also helped save my life. During combat, I had the tendency to sleep with my boots on, giving me time that I would have otherwise spent putting on shoes to analyze the situation in a speedy manner in order to fight back. If I had taken the time to tie my shoelaces, I would have failed to order my men in time.

But above all else, my decision to allow the reinforcement troops to sleep off their fatigue worked out for the best. If they had been deployed to the Gasansanseong Mountain Fortress front lines, the ROK First Division would have been annihilated. The command post was guarded by 20 to 30 military police personnel. It would have been no match for the 300 enemy troops armed with machine guns and hand grenades.


The sudden attack from the enemy in the early hours of Aug. 19 had taught me a valuable lesson: installing better security measures. I took two platoons from the ROK First Division and equipped them with machine guns to guard the command post. 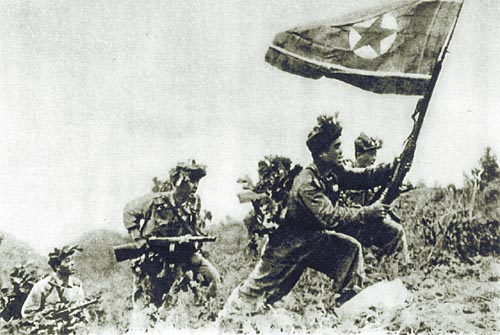 A shot of North Korean troops on the offensive, date and location unknown. The enemy troops forged ahead with aggressive attacks until late August of 1950 along the Nakdong Line. The ROK and U.S. troops put up a strong resistance effort in response. [JoongAng Ilbo]

The day before the early morning attack at our command post at Dongmyeong Elementary School, another chaotic episode had taken place.

The enemy troops had entered Gasansanseong Mountain Fortress in the early hours of Aug. 18. We were planning on using reinforcement troops to chase away the enemy and stalling the North Koreans using artillery fire.

On their way up to Gasansanseong Mountain Fortress, the enemy unleashed artillery fire in the direction of Daegu. They were aiming to damage Daegu Station in particular. Using seven artillery guns, they killed one Daegu Station employee and wounded seven others. Coincidently, the shelling fell on the day the ROK government decided to move its provisional capital from Daegu back to Busan.

The seven shells that fell on Daegu triggered anxiety and fear among the masses. Rumors started to circulate, which led to bigger rumors and even bigger ones yet. People began to fear that Daegu had now fallen into the hands of the enemy and the ROK had nowhere else to hide. At the time, the public thought that North Korea was on the verge of winning the war. I got a briefing from the Army Headquarters about the panic among the people and the severity of the situation.

The situation on the front lines was serious but it wasn’t anywhere close to the rumors that were circulating in the streets. With the help of the American allies, we were defending the front lines well and our allies were continuing to provide big help.

At the time, a population of 300,000 existing residents of Daegu along with 400,000 refugees from other parts of Korea had gathered in Daegu. A large majority of the population packed their belongings and hit the road with the thought of taking refuge south. And this was all a result of some shelling from the enemy.

It was at that time that Cho Byung-ok, the Home Affairs Minister at the time, came to Daegu Station accompanied by police officers. He had served as the department head of police affairs when the U.S. Army Military Government ruled the southern region of the Korean Peninsula in the immediate years following liberation from Japanese colonial rule.

At the time, Cho was one of the few to have studied abroad, getting his Ph.D. at Columbia University. He was one of the brightest minds in all of Korea at the time. He had the difficult task of controlling the unrest and violence in the moments after Korea’s liberation from Japan and during the tumultuous years of the Korean War.

Cho spoke to the panic-stricken crowd gathered at Daegu Station and tried to reassure them.

“Let’s trust our troops and our allies. Who else can we trust?

“Let’s not get swayed by rumors and wait on our troops. We will prevail. We just need to endure with perseverance.”

Cho, with all his charisma, took to the streets of Daegu asking the refugees to have faith in the ROK Army.

After Korea’s liberation from Japanese rule in 1945, a time of unrest ensued due to the clash of the political left and right. Cho was in charge of overseeing the police work that dealt with such unrest. The police under American military control emphasized the rule of law, and the Americans gave the police their full support.

Cho used his men to subdue the crowd and to prevent them from evacuating Daegu. It also helped our cause that the U.S. Eighth Army headquarters did not budge from Daegu.

While the crowd eventually settled, ROK and U.S. armies continued to defend their front lines well. As the tide turned against the North Koreans, they were now in desperate attack mode.

While enemy artillery fire continued on the 19th and 20th, the public showed more patience and the masses quelled their desire to gather outside as they had in the past.