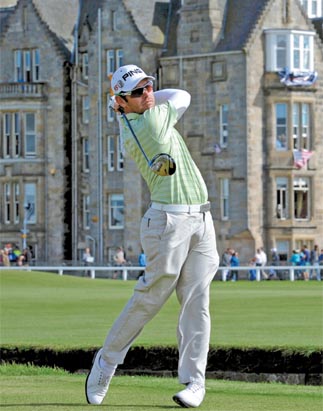 ST. ANDREWS, Scotland - Louis Oosthuizen shot a 3-under 69 and will go to the final round of the British Open with a four-stroke lead.

The South African opened with a nervous bogey, then settled down quickly on another windswept afternoon to finish Saturday at 15-under 201. His closest challenger was England’s Paul Casey, whose 67 left him at 205 overall. No one else was within six shots of Oosthuizen, who has a chance to become the first player in 46 years to win his first major at the home of golf.

Ernie Els called him on Saturday morning to wish him well. Gary Player left him a message at his hotel. Maybe it’s time for the 27-year-old Oosthuizen to start thinking he could be the next South African with a claret jug.

“I don’t think anyone was thinking I was going to be up there,’’ Oosthuizen said. “You’ve heard yourself, no one can actually say my surname, so they don’t even know who I am out there. It’s great being up there. I just want to enjoy everything about it. I loved it out there. It was great fun for me. And hopefully, tomorrow will be the same.’’

A victory Sunday would make him the first player since Tony Lema in 1964 to win his first major at St. Andrews.

“The Open at St. Andrews would be something special,’’ Oosthuizen said. “It’s one of those things you dream of.’’ Casey went out in 31 when the wind was at its strongest, and mostly blowing into his face. He finished off a bogey-free round of 67 that puts him in the final group of a major for the first time.

It might be a two-man race between players who have never seriously challenged in a major.

Oosthuizen was seven shots clear of Martin Kaymer of Germany, who had a 68 and was alone in third. Another shot behind - and eight shots out of the lead - were Henrik Stenson (67), Alejandro Canizares (71) and Lee Westwood (71), who didn’t make a birdie on the front nine but did well to at least stay in the game.

Americans have won six of the last eight Opens at St. Andrews, but they have disappeared in this one. Dustin Johnson birdied his last two holes for a 69 and was nine shots behind.

Tiger Woods, who won the last two times at St. Andrews by a combined 13 shots, has never been within four shots of the lead all week, and he wasn’t even close on Saturday. He had four long eagle putts - only one of them on a par 5 - and three-putted for par on three of them to shoot 73. He was 12 shots behind, sure to match his longest start to the season without a victory in his seventh tournament.

“I’m playing better than my position,’’ said Woods, who was tied for 18th. “I certainly have had a lot more putts on the greens than I ever have, and that’s something that has basically kept me out of being in the final few groups.’’

Phil Mickelson, who had a chance at the start of the week to go to No. 1 in the world, was another shot behind. Whatever momentum he had was lost with a five-iron that he hooked out-of-bounds for a double bogey on No. 16 for a 70.

The South African heritage at golf’s oldest championship dates to Bobby Locke winning four times in a nine-year span after World War II. Player won the claret jug three times, and Els was the most recent in 2002.

Oosthuizen, whose career was made possible by the Ernie Els Foundation at Fancourt, recalls watching highlights of the Big Easy’s tough 2002 win at Muirfield and getting goosebumps.

All he felt on the first hole on Saturday were nerves.

He had to wait 28 hours from his last putt on Friday to his opening shot on Saturday - “It felt like a week-and-a-half,’’ he said - and Oosthuizen promptly three-putted for bogey as his lead shrunk to two shots. Considering it was only the second time he made it to the weekend at a major, it looked as though it wouldn’t be long before he wilted from the pressure.

Instead, he eased his way along the humps and mounds, flashing that gap-tooth smile and following Els’ advice to enjoy himself.

Oosthuizen picked up his first birdie on the seventh hole, then added a surprise birdie late in his round with a 60-foot putt.

Even with a four-shot lead - the largest 54-hole lead in the Open since Woods led by six shots in 2000 - the real test comes on Sunday.

Casey ran off three birdies in a four-hole span early in his round, and he got as close as one-shot with a two-putt birdie on the ninth. But he had to settle for nothing better than par on the back nine, missing a 5-foot birdie on the 18th.

“I’m having a great time, and I’m going to go out there tomorrow and enjoy myself and have a good attitude,’’ Casey said. “I know what this golf course can do. It can give you some great moments, and it can give you some horrible ones.’’

A few weird moments, too.

Miguel Angel Jimenez added another highlight to the infamous Road Hole when he turned his back on the green and banged a shot off the waist-high wall, where it caromed back over the road, up a slope and onto the green.

Mark Calcavecchia wound up with a quadruple-bogey 9 on the par-5 fifth hole when he hit into a gorse bush. Woods also hit into the gorse for a bogey on the fifth.