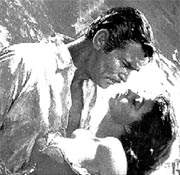 When news broke that Margaret Mitchell’s best-selling novel “Gone with the Wind” would be made into a movie, people focused their attention on who would play the role of the hero and heroine in the film.

No one raised an objection to Clark Gable, the most popular actor of the time, playing Rhett Butler, but just about everyone seemed to have a different idea on who should play Scarlett O’Hara. Although some 30 top stars, including Katharine Hepburn and Mae West, and an even greater number of ingenues were screened, legendary producer David Selznick shook his head. He wanted an actress who had magical appeal.

After shooting for four months without the heroine, Selznick chose English actress Vivien Leigh for the role. The public reacted strongly against his selection. They reasoned that it made no sense to have an English actress playing a heroine who embodied the “spirit of the South,” but Selznick did not budge.

When the audience finally watched the film, however, they spared no praise. Produced in 1939, Gone with the Wind is still regarded as a great movie that no one dare remake. The casting was too perfect to ever imitate.

It can be said of almost all movies ever remade that there is controversy over whether the director’s choice of actors coincides with the image the audiences have in their minds.

“Moss,” directed by Kang Woo-suk and which is expected to be the most successful Korean film this year, suffered from criticism that its synchro rate was low. While this is the first feature film production of the series, it was made as an animated series produced by Yoon Tae-ho that enjoyed very high popularity.

Park Hae-il, who play Yu Hae-guk, one of the protagonists, has received praise for his 100 percent synchro rate with his animated predecessor, but the casting of Jung Je-young as the village leader met criticism with a synchro rate of less than 50 percent. After the movie was released on Thursday, however, Jung’s support rate climbed sharply.

Recently, the appointments of the new prime minister and senior presidential secretaries have created much buzz. Appointing a leader whose image matches the people’s perception of the role has its own merits, as does choosing a star who can seem to handle any part.

However, even if there is controversy in the beginning, the beauty of a good appointment is that a new appointee is given time to prove they are fit for the job. We are at a time when the insight and will of human resource managers are important more than ever.