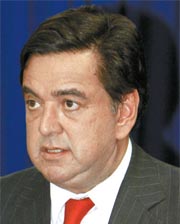 The sources based here said Han Song-ryol, deputy North Korean ambassador to the United Nations, invited Richardson in May to visit the communist state to discuss various diplomatic issues, including the sinking of the Cheonan.

“I’m aware that the North Korean side told Richardson it is willing to consider expressing regrets or making an ameliorating statement about the Cheonan incident if he visits Pyongyang,” a source said. “The North Korean government is seeking a chance to turn around the situation through Richardson since it’s been driven to a corner after the Cheonan attack.

“The North’s tactic resembles its actions in the case of the two American journalists who were released in August last year after former U.S. President Bill Clinton paid a visit to Pyongyang,” the source said.

According to the source, Richardson told the White House that he strongly wants to visit Pyongyang. When the U.S. and South Korean governments discussed whether to allow the visit or not, the South Korean government said, “It’s not appropriate for a senior-ranking U.S. official to visit Pyongyang while the international community toughened sanctions on North Korea for not admitting its responsibility over sinking of the Cheonan.”

The U.S. government at that time shared the South Korean view and James Jones, National Security Adviser for the Obama administration, told Richardson it was hard to approve his visit.

The U.S. government’s possible shift comes after the UN Security Council on July 9 adopted a presidential statement condemning the attack on the Cheonan. The Obama government is now taking a forward-looking position and it recently informed the South Korean government that “it’s hard to continuously block Richardson’s Pyongyang visit.”

“The Obama administration wants to end the disputes stemming from the Cheonan sinking and is analyzing whether Richardson’s Pyongyang visit can be used as an opportunity to deliver a message to the North Korean government that the U.S. is committed to the denuclearization of the Korean Peninsula,” the source said.

If Richardson’s visit happens, some Blue House or U.S. State Department officials may accompany him. He will be the first top U.S. official to go to Pyongyang since Stephen Bosworth, U.S. special representative for North Korea policy, made a visit last December, the source added.

Richardson visited Pyongyang in 2007 to recover remains of American servicemen killed in the Korean War.