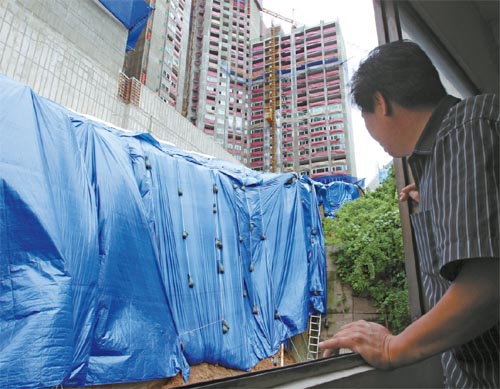 Revetments at an apartment construction site in the Geumcheon District of Seoul collapsed after heavy rain hit over the weekend. [YONHAP]

A man in his 70s in Asan, South Chungcheong, drowned after he went to check the sluice gate of his paddy at 5:50 a.m. on Saturday.

A driver surnamed Choi, 42, was killed instantly after his car skidded on a rainy road and hit a street lamp on Tongilro in Paju, Gyeonggi, at 11:20 p.m. on Friday.

The southern part of the peninsula received the heaviest rain, the state-run weather agency said.

“I woke up to the sound of rain and I saw the roads transformed into rivers, and many cars were washed away,” said Kim Jae-cheol, a 61-year-old resident in Nogok-dong, Buk District in Daegu, which is adjacent to the Geumho River. “In 10 minutes, dozens of low-lying houses in my neighborhood were submerged.” Branches of trees and trash clogged drains in Nogok-dong, and 44 low-lying houses and 96 cars went underwater.

Residents blamed the Buk District Office for failing to promptly react to the heavy rainfall and causing “a man-made disaster.”

“The district officials didn’t start drain pumps at the right time and the pumps were clogged,” a resident complained.

Kim Jeom-yong, an official with the district office, said the local government turns on pumps when it receives alerts from residents, but the low-lying houses were already underwater by that time.

The heavy rain disrupted rail service after it swept away a 50-meter (164 feet) stretch of track in Haman in South Gyeongsang at 8:20 p.m. Friday. Rail service was suspended until workers repaired the stretch 10 hours later.

“A massive amount of water vapor caused by flooding in south China traveled to the Korean Peninsula and confronted a cold air mass, and that’s why the rain was so heavy through the weekend,” said Oh Bong-hak of the Korea Meteorological Administration.

“It’s unclear whether the monsoon season will end soon because the seasonal rain front in North Korea may come down to the South.”

Oh said a heat wave will hit the Korean Peninsula after Chobok, one of the three hottest days of year, which falls today.