Yu-na to bow out of ISU events

Yu-na to bow out of ISU events 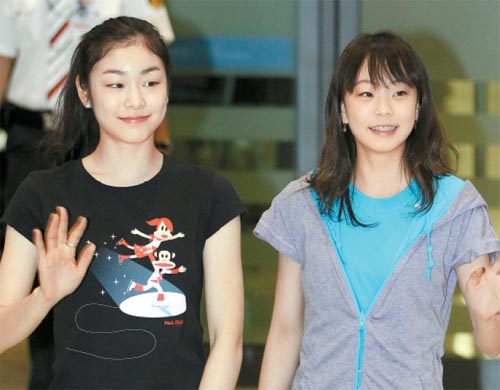 It will become significantly harder for fans of figure skating to catch Kim Yu-na in competition, as the star athlete revealed yesterday that she will not participate in ISU Grand Prix events in the upcoming season.

Instead, Kim will focus on preparing for the 2011 World Championships.

The 20-year-old Olympic gold medalist talked about her plans with reporters yesterday at Incheon International Airport after arriving in Korea to participate in the Samsung Anycall-Hauzen 2010 All That Skate Summer ice show this weekend.

“I’ve decided to skip the ISU Grand Prix season, which starts in October, and will prepare for the World Championship” to be held in Japan between March 21 and 27, Kim said.

“I will not compete in the Asian Winter Games [in Kazakhstan in January of 2011], either.”

While Kim has participated in an average of four to five events each season in the past, she plans to get involved with no more than two this time around.

Her season debut will come at the 2011 ISU World Figure Skating Championships in March.

Kim’s selective approach is expected to give her and her coaching staff plenty of time to prepare new routines for both the short and long programs.

“We have not started our preparations for the World Championships,” Kim said. “My coaches and I will discuss the possibilities for my new programs once I get back to Toronto, Canada, after the ice show.

“I want to include some Latin flavor to either my short or long programs. I want to showcase a tango routine.”

In preparation for the ice show, Kim has been working with her coach Brian Orser and choreographer David Wilson on a new gala program to the tune of La Roux’s “Bulletproof.” Kim will feature her new routine during the show, to be held at Kintex in Goyang, Gyeonggi, from Friday through Sunday.

Accompanying Kim will be notable skaters such as Michelle Kwan, Sasha Cohen, Stephane Lambiel, Brian Joubert and Kwak Min-jung, among others.

After reaching her goal of winning an Olympic gold medal at the 2010 Vancouver games, Kim hinted at retirement, triggering widespread speculation about her future.

Despite cutting back on the number of competitions she’ll participate in, however, Kim reassured her fans that her passion for the sport remains in tact.

“I’ve been competing for a long time, but there are so many genres that I’ve never tried,” Kim said. “There are a countless number of programs I want to try out, and I have many ideas.”

One figure skating official said Kim’s move to focus on the World Championships will help eliminate some of the stress in her life and allow her to prepare for the events that matter to her at this point in her career.

“It’s not important how many competitions Kim will enter in the upcoming season, but rather how she takes care of herself during the offseason,” said Lee Ji-hee, the former vice president of the Korea Skating Union’s figure skating division.

“Having reached her lifelong dream of winning a gold medal, it’s a lot of pressure for Kim to even compete this season. She will be pressured to place first in all events she enters.”

Kim is set to depart for Toronto on July 29 to start preparing for the 2011 World Championships.