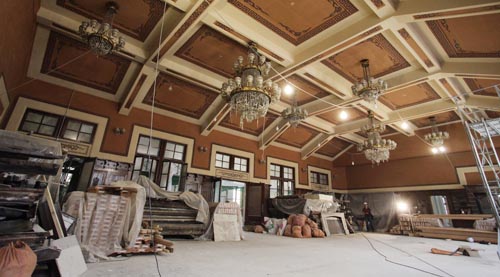 Seoulleok Grill on the second floor of the old Seoul Station will be remodeled into an exhibition hall. By Park Ji-hye

The Culture Ministry announced last week that the old Seoul Station will have a new life as a cultural hot spot next March.

The old station stands right next to the current one and is linked to the subway station of the same name.

Seoul Station opened in 1925 and shut down in 2004, when its replacement was completed and the country launched the KTX high-speed rail service.

The old station is historical landmark No. 284. It was taken over by the Japanese during their colonization of Korea and was the key means of transportation for refugees during the 1950-53 Korean War. When the war ended, Koreans moving from the countryside to the capital passed through Seoul Station in search of a fresh start.

At the press conference last Wednesday, which took place at the old station, the ministry said it aims to restore the station to its original appearance and that 53 percent of the process had been completed as of last week.

Construction materials were spread across the site: steel frames filled the rooms and cement walls were exposed.

Ahn Chang-mo, a professor of architecture at Kyonggi University who is taking part in the restoration project, said, “We intend to maximize the building’s historical and cultural value.” 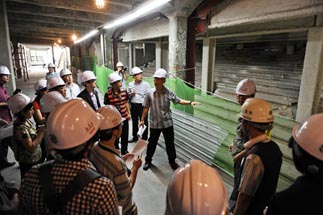 Officials explain the progress of the restoration project at a press conference last Wednesday. The new building will open in March 2011. [NEWSIS]

The red brick building, which is built in the Renaissance style, consists of one basement floor and two floors above ground. The first floor had a central hall and separate waiting rooms for regular customers, VIPs and women. The second floor had a barber shop and a Western-style restaurant. The basement served as an administrative office.

“The VIP rooms were the only spaces where the president and civilians could meet each other,” Ahn said. “We are looking for photos that show former presidents such as Syngman Rhee and Park Chung Hee sitting in the VIP room.”

Following years of debate over how the renovated space should be used, the ministry finally decided to turn it into a cultural space.

The central hall will become a multi-purpose venue and the waiting rooms will be transformed into a cultural exhibition hall that will show the modern and contemporary history of Korea.

The Seoulleok Grill, which was touted as one of Seoul’s fanciest restaurants in the early 20th century, will be used for exhibitions, while the metal structure under the domed roof will serve as a venue for art installations.

The ceiling of the central hall, which was destroyed during the Korean War, will have stainless glass works by modern artists, the ministry said. A 130-seat concert hall and an outdoor terrace along the railroad will also be established.

Renovation of the old station began in September 2007 under the supervision of the Culture Ministry. Between 2004 and 2007 the ministry used the space for cultural events including art and photo exhibitions, concerts, conferences and fashion shows.