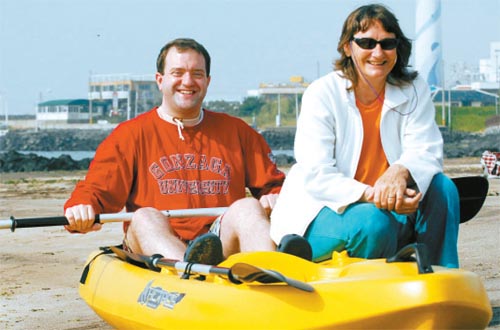 Sherrin Hibbard, right, will swim around Jeju Island and Steve Oberhauser will follow her in a kayak to raise awareness about the environment. By Kim Young-ha

Two Jeju English teachers will swim and kayak 200 kilometers (124 miles) around Jeju Island in a campaign called the Jeju Big Swim to draw attention to the environment. The two will start their journey at the end of the month.

“This is a part of an educational campaign to raise awareness about the sad state of our environment,” said Sherrin Hibbard, a 51-year-old former fisherwoman from Australia who came up with the idea for the campaign.

Hibbard has been living on Jeju Island for six years and works as an English teacher at Jeju National University Middle School.

As part of the campaign, Hibbard will swim 200 kilometers around Jeju Island from July 31 to Aug. 26. She will be accompanied by American Steve Oberhauser, 31, who will follow her in a sea kayak. The two will write a daily log and post pictures on their blog at http://thejejubigswim.blogspot.com/ to give Internet users a glimpse of their progress and to show the current state of the environment on Jeju.

“Jeju is such a beautiful place with huge potential, but it is being spoiled,” Hibbard said. “We want to let people know that there are many things they can do to make Jeju a cleaner, greener environment.”

Oberhauser, who teaches English at Sehwa High School and works as a reporter for KCTV English News and The Jeju Weekly newspaper, describes himself as an “avid lifelong outdoorsman” who loves traveling and kayaking.

To prepare for the event, Hibbard and Oberhauser have been following a rigorous training schedule since May. They train for two hours per day on weekdays and three to four hours on weekends at Samyang Beach. Their regimen includes biking, swimming and other activities.

“This is something that had to be done to promote environmental education and awareness in my hometown of Jeju,” said Hyun Sung-mi, a 23-year-old Jeju National University student who joined the Jeju Big Swim project as a media liaison.

The project is a part of the World Environment and Peace Summer School, which will convene over 300 students, teachers and government officials from Korea and abroad at Jeju National University from July 26 through Aug. 20. The courses will examine environmental issues ranging from climate change to seashore tourism, in addition to Korean culture and politics.

“We believe as individuals everyone can make choices and take actions that will make our environment a cleaner and better place,” the event Web site says.

“Every day we make important decisions that impact our environment in fundamental ways.”

The project is supported by donations and volunteers. Those who are interested in contributing to the project or participating as a volunteer are asked to send an e-mail to jejubigswim@gmail.com. For more infromation, go to the Web site: www.thejejubigswim.com.