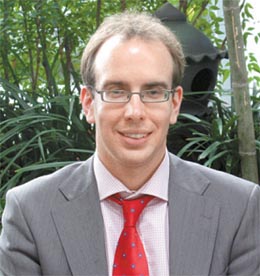 An Australian man has become the first diplomat to serve as an intern at the National Assembly of Korea.

Anthony Skews, who previously worked for the Australian government, spent last Thursday and Friday at the National Assembly working as an intern for Rep. Park Sun-young, a spokeswoman for the Liberty Forward Party. He had a busy two days attending conferences with Park and doing research and analysis on North Korean human rights issues.

He is currently preparing for his position in the political affairs department at the Australian Embassy in Seoul, which he starts in September.

“I was very interested in human rights issues when I studied in Australia,” Skews wrote in a cover letter he submitted when he applied for the internship. “After seeing materials showing the terrible human rights conditions in North Korea and Zimbabwe, I became more concerned about the issues in the two countries.”

He went on to say that he applied for the internship under Rep. Park because she actively participates in issues regarding North Korean defectors and human rights in North Korea.

Skews completed his master’s degree in international law at the Australian National University. He is also proficient in Korean.

He worked for two months as an intern at the Citizens’ Alliance for North Korean Human Rights and for a month as an intern for the Korean Sharing Movement.

“I was very impressed by Skews’ enthusiasm for North Korean human rights issues,” Park said, “It would be great if Korean diplomats could also actively engage in these issues.”