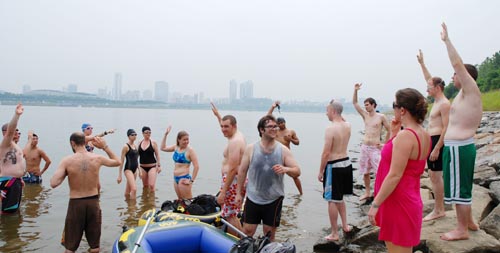 Members of the the Han River Swim Club prepare to swim across the river on July 9. Provided by the club

Clouds parted on June 9 to let a small group of foreigners living in Korea go where not many Koreans dare - into and across the Han River.

At 1 p.m., the group trickled in ones and twos down to Ttukseom Station in southeastern Seoul.

With 23 people gathered for the event, the group proceeded to the river, where 16 people shucked off their clothes to reveal colorful swimsuits and jumped into the water. The rest crossed the river on foot.

The expat swim club, which celebrated its fifth annual swim this year, started five years ago with a brief conversation between two roommates on a subway.

“We were crossing the Dongjak Bridge, I think ... in early 2005,” said David “Gravy” Schultz, 29, recalling the day he and his friend, Angus King, were looking out the window of a subway car crossing the bridge. “‘You know,’ Angus said, ‘that’s swimmable’.”

A few months passed and in April 2005 the two dove into the Han River near Yeouido, Seoul “with no supervision,” said Schultz. “There was some guy fishing on a little island in the middle of the water who could have been watching us. But it was the both of us going across the river, and back then we didn’t know what we were doing.”

Schultz said he had qualms about the quality of the water in the river, but it was not enough to deter him from diving in.

“I compare it to going to a club on a Saturday night,” Schultz said. “I think people are exaggerating about the water quality, and it has gotten much better.”

King said many of his Korean friends ask him why they swim in the river.

“Why not? To me it doesn’t seem that strange,” he said. “Why wouldn’t you? It’s the biggest river in Korea.”

On the day of this year’s swim, the 16 people swam through the current with no hesitation. They were trailed by a large inflatable raft with a lifeguard onboard.

People who would like to join can find the team on Facebook under “Han River Swim Club.” But Schultz warned that not all people can join the swim event because it “is not an easy thing, and you have to know how to swim.”

On the day of the anniversary event, two people had to be rescued by the raft after tiring from fatigue.

The other 14, however, made it to the other side after roughly 40 minutes. The event finished with a riverside picnic, complete with chicken and watermelon.

“I see the Han River with a lot of potential,” said Schultz, “There should be more people enjoying it. It’s out there. It’s free.”