From turntablist to POP idol

From turntablist to POP idol 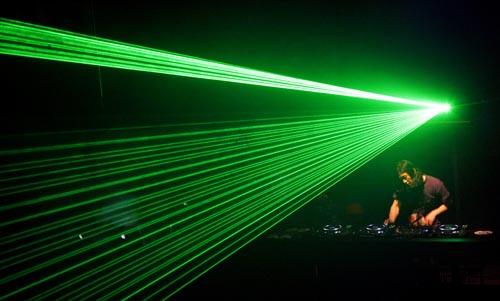 DJ Gon plays on a recent weekend at Club Answer in southern Seoul. By Jeon Min-kyu

People are shaking their hips and twirling their arms in the air. But instead of facing one another, the crowd of people, packed shoulder to shoulder on a recent summer night, only has eyes for one person - the D.J.

“D.J.s are here to play for each and every one of the clubgoers,” D.J. Guru said after finishing his set at Club Answer in Gangnam, southern Seoul, on July 3. “It feels good when people go to the dance floor as they listen to what I play.”

Until recently, D.J.s were considered as little more than human record players. Now they are recognized as artists at the forefront of a thriving underground subculture.

Whereas the D.J.s of the past confronted a public more interested in meeting friends than listening to music, the D.J.s working today are pop music idols with large fan bases and record deals.

“It happened quickly, but I produced my own album last year, with the hope that many people would listen,” said D.J. Guru. “More and more D.J.s are producing their own sounds, though there aren’t enough of us yet.”

This transformation started in the late 1990s, after many of Korea’s booking clubs went out of business in the wake of the 1997 financial crisis. Nightclubs then emerged as the new venue for evening entertainment.

The D.J.s who worked in the clubs back then brought hip-hop, rap and other underground music genres to the attention of the public and the clubs started filling up. More and more D.J.s started mixing songs to create something new - long, trance-inducing variations on a single song. The public went wild.

All of the work has been worth it. Although the concept of the D.J. as an artist is just starting to catch on in Korea, Korean D.J.s are now known and respected for their turntable skills.

“When I came to play in Korea, I was amazed to see how creative Korean D.J.s are when mixing songs,” said Richard Durand, a D.J. from the Netherlands who was playing at Volume in Itaewon on July 10 when he spoke with the JoongAng Daily.

Powered by the clubs 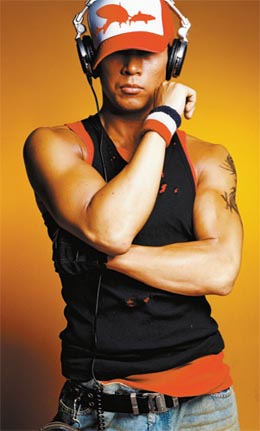 The D.J. scene has flourished on the back of a thriving club industry that is now employing D.J.s as full-time staff members.

Under the so-called resident D.J. system, club owners do not need to find a new person to play every week, and D.J.s benefit from the steady income, which, in addition to relieving them of the task of always looking for a new gig, means they can focus on their own projects and on developing their own sound.

“Since there are about five resident D.J.s in one club that are supposed to make one song for the night, I have learned to be a part of a group while also adding my musical specialty during my assigned time,” said D.J. Gon of Club Answer, who we spoke to on July 3. “It is a good deal all around for D.J.s.”

The new system has fueled competition among D.J.s for jobs, gigs and songs.

“Sometimes when I’m in bed, I start to think that someone else is still awake and searching for the next mind-blowing song,” said D.J. Jerry M who was doing a set at Club M2 in Hongdae, the area near Hongik University, on the evening of July 4. “Then I have to get back on my computer and look for songs.”

D.J.s train themselves how to read musical beats by listening to a huge number of songs. Then they search for tracks they can mix together. A good D.J. can tell if a song has the beat they are looking for after listening to the first minute.

“At first, I was only able to use two of the 10 songs I had downloaded,” said D.J. Jerry M. “But now I have a better idea of the sounds I need.”

Although old school D.J.s relied on turntables and records, the D.J.s of today use CDs more than LPs, even if the quality is not quite the same.

“Without a doubt the quality of CDs is not as good as that of an LP, but it is easier to handle CDs when mixing songs,” D.J. Gon said. 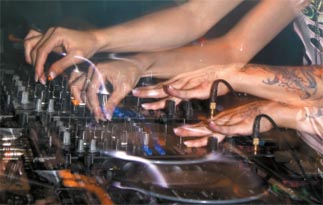 A DJ uses a CD player and sound equalizer during his set at a club in Seoul.

Even after hours and hours of meticulously listening to every bit of a song, D.J.s don’t go to a gig with a prepared set list. Everything happens spontaneously once they get on stage.

In the beginning of a set, most D.J.s try to gauge what clubbers want and then try to build excitement as the night goes on.

“The public is very receptive to every single beat,” D.J. Guru said.

“A D.J. should know how to control the club crowd and know when to mix what songs,” Han Jo Chul Hee, a manager of Club Eden in Gangnam, said in an interview on July 10. “Good D.J.s not only keep the clubbers dancing, they also keep them in a party mood, which helps boost a club’s sales.”

Celebrity D.J.s have also played a major role in making the job popular.

When singer Koo Jun-yup, former member of the male duo Clone, returned to the music scene as D.J. Koo in 2007, he brought with him a new legion of fans who would later become devoted followers of the D.J. scene.

“It was the right time to continue my music career,” said D.J. Koo, who was scheduled to appear on a television program in Sangam-dong, northern Seoul, when we met him on July 6. “The public got to enjoy music that hadn’t been known in Korea.”

His popularity had another effect - the number of D.J.s has soared since his return to the music scene.

In addition to continuing his activities as a D.J., Koo is now the owner of Koobar in Apgujeong, southern Seoul.

Meanwhile, changes in music education have also increased the number of D.J.s in Seoul.

In the beginning, D.J.s either taught themselves or taught each other. These days, however, schools hoping to capitalize on the popularity of the art have started offering classes in becoming a D.J.

For example, the Seoul Arts Technical College recently announced the start of a D.J. degree program. And Battle D.J., a private D.J. institute, offers classes that are open to the general public.

“Four out of 10 people who come to our academy have full-time jobs and learn how to mix songs for fun,” Cho Ji-hoon, the CEO of Battle D.J., said in an interview at the school earlier this month.

Despite the sudden interest in the D.J. scene, there is no specific data on how many are currently active in Korea and how big the market is.

“We can only guess about the number of active D.J.s by counting the number of resident D.J.s at major clubs nationwide, but we believe it is around 80,” said D.J. Gon. “No one knows how many people consider themselves a D.J.”

Still, the market for D.J.s has drastically expanded. They are now invited to play music at a variety of parties, both public and private, and hotels and corporate events.

In addition, the club scene has gradually expanded to include southern Seoul. Many D.J.s migrated away from the clubs of Hongdae, which is populated by young university students and artists, to Gangnam, which is more upscale, and started opening their own clubs starting around 2000.

“People say that Hongdae is where content is created, and Gangnam is where that content is consumed,” said D.J. Gon, who claims that Gangnam has become another music mecca. For D.J.s, it is a chance to try a new kind of music.

“The atmosphere and interior of the clubs in Gangnam is different from the ones in Hongdae,” Yeo Jong-gun, a partner of Club Answer in Gangnam, said in an interview on July 3. “And that’s how we stay competitive.”

As the status of the D.J. has grown, a debate has emerged about just what role they should play in front of the club crowd.

D.J. Unkle, a member of the first-generation D.J.s in Korea and owner of one of the most popular clubs in the Hongdae area, says that music cannot exist without the public.

“D.J.s are here to entertain people,” said D.J. Unkle, who was working at M2 in Hongdae when we met him on July 7. “We cannot act stubborn about our own taste in music when we play onstage. Entertaining people is the first thing a D.J. should consider.”

Unkle once played at the same club with D.J. Sunshine, who has very different views on the subject.

“Real appreciation for music is disappearing,” D.J. Sunshine, the owner of Joker Red in Hongdae, said later that night. “Some D.J.s downplay the music just to make the public happy.

“Hongdae has changed. People here only get excited by instant music. Hongdae used to be the music mecca of Korea but that’s no longer true.”

Some D.J.s, however, choose to focus on another aspect of their jobs.

“We just hang out doing something we like,” said D.J. Gon. “Our desire for fun has led us this far, and it will keep us going in the future.”