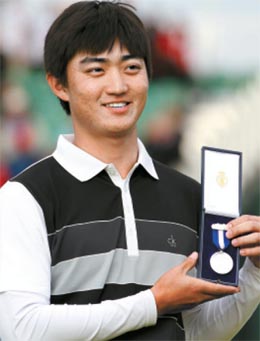 ST. ANDREWS, Scotland - Korean amateur star Jeong Jin is not sure how much longer he will play for his homeland or if he will seek Australian citizenship, but he certainly will not become a Scotsman any time soon.

The 20-year-old who won last month’s British Amateur crown at Muirfield added to his trophy case Sunday when he collected the low amateur silver medal in the 150th anniversary edition of the British Open at the famed Old Course.

“It was a dream come true. I won the British Amateur and finally played at St. Andrews. It’s quite a lot,” said Jeong, the only amateur to make the cut. “It’s hard to believe.”

Busan-born Jeong has been based in Melbourne, Australia, for the past four years and is pondering a move to become an Aussie.

This week he experienced a bit of Scottish culture, discovering that the food is not exactly the popular Korean dish bulgogi or even the Australian staple Vegemite.

“I tried to eat black pudding. That was quite tough,” Jeong said. “I like fish and chips. Haggis came out the other day for breakfast, but my coach said ‘don’t try it,’ so I didn’t.”

Jeong’s coach Trevor Flakemore, who doubled as the golfer’s British Open caddie, has helped turn his teen pupil into a major contender.

“Australia has great practice facilities, better than Korea, so I could practice as much as possible, and that has helped my game quite a lot,” Jeong said. “I’ve got permanent residency there now, but I can’t say much about citizenship now, because we need to wait and we need to think about it more.”

Jeong said he would like to play for Korea in upcoming amateur events but is uncertain whether he might try for spots on Aussie teams if that bid fails.

One thing Jeong knows is that he will delay his jump to the pro ranks until he can take advantage of his British Amateur title to play in next year’s Masters at Augusta National Golf Club.

“I was going to turn pro this year, but I won the British Amateur, so now I can play the Masters next year. I really want to play that tournament so I’ll stay amateur until then,” Jeong said. “I will turn pro after the Masters.”

For now he is content learning about Aussie sports, including Aussie football and cricket. Still, he finds them boring, “so I don’t watch,” he said.

Jeong, whose father missed the Open because of work obligations at a Korean construction firm, shared 14th on four-under par 284 after a 25-foot eagle putt on the 72nd hole one day after missing a similar chance.

“I don’t think I will ever forget that moment,” Jeong said. “When I missed the putt the other day, I was in bed that night and I just couldn’t sleep. So when I approached the putt the next day, I told my coach, ‘I really have to make that putt,’ and I got it so I’m really happy.”

Jeong said he takes inspiration from Korean Yang Yong-Eun’s victory in last year’s PGA Championship, the first major title by an Asian man. However, Jeong said he was confident about his potential to win such big tournaments all along.

“Even before he won the PGA I was thinking ‘I can win major tournaments in the future.’ But Y.E. did it first, so he gave me a lot of confidence,” Jeong said. “Definitely I feel like I can do that.”