No need for leisure sickness

No need for leisure sickness 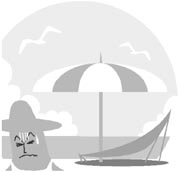 You’ve been working hard all year, and you need to get away from it all. But as summer arrives and you schedule your vacation, you begin to feel ill: You have a headache, a stomachache and you’re feeling lethargic. You barely have enough time to have fun, much less waste your valuable vacation in bed.

But don’t feel so bad about yourself. You’re not the only one. According to psychology professor Ad Vingerhoets at Tilburg University in the Netherlands, who surveyed 2,000 people in 2001, one in three people experienced these symptoms. They were suffering from “leisure sickness,” an affliction that typically affects overachieving perfectionists with a high sense of responsibility. Toiling away day and night, these workaholics don’t have time to be sick, but just as they take a break - their stress and anxieties temporarily lowered - they get ill.

Korea has no fewer workaholics than any other country in the world, and if the survey had been taken in Korea, the percentage of the patients would have probably been much higher. After all, we sleep the least and work the most of all Organization of Economic Cooperation and Development (OECD) member countries. Koreans work 2,316 hours a year, but sleep an average of 7 hours and 49 minutes a day - a figure that includes infants and children. And of course, Koreans have the fewest vacation days among the nations.

The problem, however, is that Korean workers don’t get to take the vacations days they deserve because they’re burdened with too much work. Earlier this year, the Wall Street Journal reported that President Lee Myung-bak had ordered government officials to take a mandatory 16-day vacation annually, while he himself took only four days off. The director at the Ministry of Public Administration and Security who drafted the mandatory vacation plan had one day off from work.

Lee Charm, CEO of the Korea Tourism Organization, said that Koreans miss out on the “three joys of vacation” - the joy of planning one, of being on one and of remembering it. “They go when the opportunity arises, usually very spontaneously. And because they didn’t prepare well, they have a lot of stress and usually have to pay more. And when they get back, instead of having nice memories, they feel tired and stressed out and think, ‘Never again.’”

The end of the monsoon season signals the start of vacation season. And if you think you can’t afford to take a vacation, you should reconsider. Bosses who are reluctant to approve vacation requests, in particular, need to think again. Our society can only function well when we have sufficient rest. We work the most, but our productivity is one of the lowest among the OECD members, partly because of the vacation deficit. Looking forward to an upcoming vacation can make your days at work happier. And there would be no need for leisure sickness.