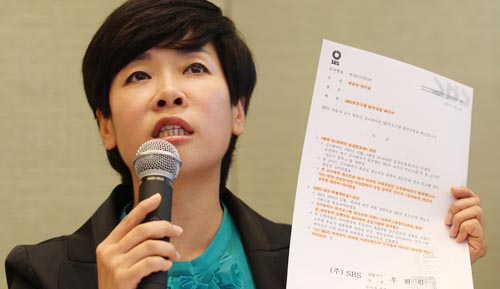 Comedian Kim Mi-wha shows a document she submitted to police at a press conference yesterday at the Marriott Hotel in Yeouido. By Kim Min-gyu

Comedian and radio broadcaster Kim Mi-wha, who is being sued by national network KBS for accusing it of having a blacklist that excludes “left-leaning” celebrities from roles on TV and radio shows, appeared for questioning at Yeongdeungpo police yesterday.

“I feel like I’m a daughter being sued by my own parents,” Kim said at a press conference yesterday at the Marriott Hotel in Yeouido prior to turning herself in for investigation. “I repeatedly told KBS that it doesn’t have to file a complaint into this case, and I didn’t want this case to become this big, but we have reached this point.”

The “blacklist” controversy began when Kim posted a Twitter message on July 5 saying she heard rumors that liberal talents, including herself, can’t get parts on KBS because they support opposition parties. Kim’s tweet was sent to over 30,000 of her followers and spread further on the Internet.

Faced with criticism, KBS on July 6 requested that police investigate Kim for defaming the broadcaster by spreading “unverified information.”

After a KBS union statement released in April that cited an insider document, Kim learned she was one of the least favored talents at KBS. The document said some “controversial narrators are getting roles on KBS.”

“I wrote the Twitter message to ask whether the KBS blacklist actually exists, and KBS only had to give me one word that it doesn’t. But they shot an arrow at me,” Kim said. “KBS is special to me because I received so much love from fans after I appeared on its comedy shows. I took this issue to the public because I thought I have the right to ask the broadcaster why I can’t get roles.”

KBS flatly denied that the insider document quoted by its union is the blacklist.

“The term ‘controversial’ narrators in the document didn’t mean political or ideological controversies surrounding narrators. It was about the narrator’s basic qualifications,” a statement released by KBS said.

“Kim’s pronunciation and breathing during narrations were awkward and unnatural,” the statement said. “It’s unfortunate and sad not only for Kim but also for KBS to have to take legal action against her for defaming the broadcaster.”