Sliding under the spotlight, Kim key for Taegeuk Ladies

Sliding under the spotlight, Kim key for Taegeuk Ladies 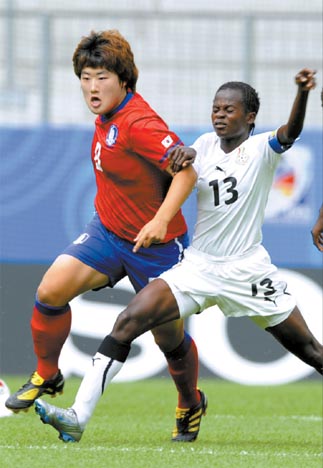 Kim Na-rae dribbles past a Ghana defender during a 2010 U-20 Women’s World Cup match on July 28 in Dresden, Germany.[YONHAP]

While Ji So-yun has been garnering much of the attention with her goal-scoring prowess, Kim Na-rae has quietly led the young Taegeuk Ladies to a spot in the quarterfinals at the U-20 Women’s World Cup in Germany.

Korea climbed to first overall in Group D with a 4-2 win over Ghana last Sunday, giving it a berth in the quarterfinals for the first time ever. It was another convincing win after a 4-0 thrashing over Switzerland in the opening game on July 15.

Ji has made all the highlight reels, scoring a total of five goals in the first two games, including a hat-trick against Switzerland.

But much of the credit for Korea’s success is also tied to the do-it-all midfielder Kim.

Boasting a strong physique and an accurate shot, the dead-ball specialist has been producing key assists and goals for Korea so far at the U-20 Women’s World Cup.

Take her free kick from 30 meters (98 feet) out in the 63rd minute of the second match, which found its way into the net and tied the game against Ghana at two goals apiece.

The goal served as the turning point in the game for Korea, and the team went on to defeat Ghana 4-2. It was also selected as FIFA’s Goal of the Day.

Additionally, Ji’s equalizer in the 41st minute of the match came off Kim’s free kick.

“Kim possesses great size but she also has great control and decision-making skills and improvises well on the fly,” said Choi In-cheul, the U-20 women’s national team manager. “Since she possesses a deadly free kick, we worked on perfecting our set piece plays and it has paid off.”

Listed at 172 centimeters (5 feet 8 inches) and 70 kilograms (154 pounds), the 20-year-old student at Yeoju Institute of Technology in Yeoju, Gyeonggi, boasts the physical strength necessary to jockey for positioning deep in the opposing team’s zone.

She appears to lack the quickness often found in smaller players, but she has great timing on her shots and, as Choi said, can improvise on the fly.

Kim has also shown her ability to find the net this year, taking the top scoring honor at a national women’s collegiate tournament held on Jeju Island in May.

Although her build comes in handy against defenders on the pitch, it was a cause of frustration in the past. During her days at Buheung Middle School in Anyang, Gyeonggi, Kim was known for frequently committing fouls because most defenders would bounce off her or fall to the ground upon coming into contact with her.

And as a student at Ohsan Information High School, male schoolmates in their first and second year had trouble keeping up with Kim in physical battles on the field.

“Those who come into contact with Na-rae on the field all tend to go bouncing off her,” said Kim’s Yeoju Institute of Technology teammate Kim Jin-young.

Up until two years ago, she had trouble channeling her strength properly, and her positioning was often off. These shortcomings prevented her from contributing to the overall team effort.

Choi, who started coaching Kim two years ago, helped the up-and-coming player turn her shortcomings into strengths. Her ball-handling skills and ability to distribute from the midfield has noticeably improved this year.