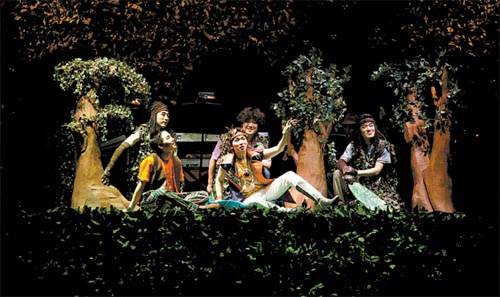 Kim Ho-young, center front, who plays Valentine in the musical drama, “Two Gentlemen of Verona,” sings about his undying love for Silvia. Provided by Seensee Company


“Two Gentlemen of Verona,” the first play William Shakespeare ever wrote, is back in Korean theaters in a modern musical adaptation. It will be performed from July 17 to Aug. 28 at the Sejong Center for the Performing Arts.

Shakespeare’s original is rarely performed here, but veteran director Glen Walford, who has directed many Shakespeare plays, is bringing the play to Korean audiences.

Walford also directed a version of the musical version in Japan in 2007, with music by Ben Goddard. However, the production has grown since. The number of songs increased from five to 11, and there are two additional band members.

Walford said that the musical was a challenge to put together, which for her was part of the fun.

“Of course there’s pressure,” Walford said after the press preview last Friday. “One of the reasons it is rarely performed is because the original play is so long and the language is complicated, but I had fun recreating it.”

This is not the director’s first production in Korea. She worked with the Korean production company, Seensee Company, on the musical “Blood Brothers” in 2004, and “Shirley Valentine” in 2006.

The play tells the tale of all kinds of love - between a man and a woman, between friends and between the daughter of a duke and her servants.

“It was entertaining to see the word ‘love’ used so often in the musical drama,” Walford said. “Shakespeare never used the word ‘love’ this many times in one play. Maybe it’s because Shakespeare was young when he was writing this play.”

Still, audiences are likely to be touched by the ways people express their love for one another in this production. The main characters write to their loved ones expressing how much they care for each other, which is heart-warming in our modern e-mail era.

Even though it is based on a somewhat serious story about two men from Verona and their conflicts over love and friendship, the musical drama still has its comic elements.

At the beginning of the play, the two best friends sing a song together confirming their belief that they can achieve anything they desire if they put their hearts into it. The content of the song seems serious, promising a glorious future for each of them, but the dance and the facial expressions of the actors contradict this, and their movements make them seem almost ridiculous. The music is very upbeat.

“It would be hard for an audience not to burst out laughing since the characters look weirdly serious in the amusing situations in which they find themselves,” said Kim Ho-young, who plays Valentine, one of the two gentlemen of Verona. “We wanted to give the audience more than just a little laughter from this play of words.”

Kim said he was happy to be working again with Lee Yul, who plays Valentine’s best friend, Proteus. The two worked together in the musical, “Quiz Show,” which ran form December 2009 to January this year.