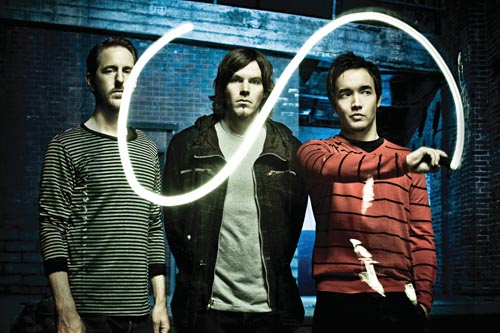 The American rock band Hoobastank is just one of the many groups scheduled to perform at the 2010 Incheon Pentaport Rock Festival at Incheon Dream Park this weekend. See FESTIVALS, below. Provided by the festival

To Sunday: Son Ho-young, a former member of the boy band g.o.d., is passionate in communicating with the audience, a quality that fans will see close up in this small black box theater.

In addition to being active in the music scene, Son performed as Chad in the musical “All Shook-up.”

July 27: To commemorate the 60th anniversary of the Korean War, musicians from 16 countries that sent soldiers to the war and five countries that supported the war will gather in Korea to perform a classical concert for world peace. Christoph Poppen, principal conductor of the German Radio Philharmonic Orchestra, will conduct 21 musicians of different nationalities.

July 29: Pavlo is a singer, composer and guitarist who specializes in Mediterranean music.

His music has been influenced by traditional Latin music, flamenco as well as Mediterranean performance styles played with a traditional Greek instrument called the bouzouki.

On his recent album “Irresistable,” which came out in 2006 and was ranked on Billboard’s top 10 in Canada, he offered modern reinterpretations of flamenco and Latin music.

Pavlo gained international recognition after the pop star R. Kelly sampled Pavlo’s music in one of his songs.

He has played at the Montreal Jazz Festival and at venues around the world.

At the group’s eighth regular concert “The Night of Korean Composers” the group will play a variety of musical genres.

July 30: Urisori was founded in 1993 by Kim Young-jae, who is an expert in geomungo (a kind of zither) and haegeum (a type of fiddle).

It is a small theater company committed to building a better musical environment for traditional Korean instrumentalists.

The program Gonggam Masters’ stage features experts in Korean traditional instruments, including Lee Cheol-ju, who is a master daeguem (a type of wind instrument) player.

July 30 to 31: This Korean version of the play is based on the French epistolary novel “Les Liaisons Dangereuses” by Pierre Choderlos de Laclos and the 1988 movie “Dangerous Liaisons” by Stephen Frears.

The play tells the story of the Marquise de Merteuil and his rival the Vicomte de Valmont, who use sex to humiliate their enemies in a treacherous game of deception that devolves into a twisted quest for revenge.

Tuesday to Sept. 26: “Triangle” was created and ran for 14 years in Japan following its debut there in 1974. This performance run marks its Korean debut.

Based on the musical “Show Girl,” Triangle is about a love triangle between a girl and two boys who accidentally come to live together. It features many hit songs by pop artists from the 1970s and 1980s, including Elton John and Deep Purple.

Songs such as “Your Song,” “Video Killed the Radio Star” and “All By Myself” will have the audience feeling nostalgic.

Performances begin at 8 p.m. on Tuesdays to Fridays and at 3 and 6 p.m. on Saturdays and Sundays.

Theater Yong at the National Museum of Korea

To Aug. 29: This family musical is running in tandem with the exhibit “Gods, Heroes and Mortals: Art and Life in Ancient Greece,” which is at the National Museum of Korea through Aug. 29.

The musical encourages children to learn more about history. The fantastic images and characters from Greek and Roman mythology will delight children and keep their attention.

Performances begin at 11 a.m. on Tuesdays and Thursdays, at 11 a.m. and 3 p.m. on Wednesdays and Fridays and at 2 and 4 p.m. on Saturdays and Sundays.

Tomorrow to Aug. 22: The plot of this thriller musical is based on the life of the unidentified serial killer who terrorized Greenwich, London, for two months in 1888.

The musical, written by Slovak artist Va?o Patejdl, had 200 performances in the Czech Republic before it hit Korean theaters in 2009.

This version of the musical will star well-known actors Ahn Jae-wook and Yoo Jun-sang.

To Sunday: This concert attempts to convey the simplicity of nature and cleanse the mind through performances of music played on instruments made of bamboo.

For example, recorders, melodeons and bamboo drums will be used to play a song called “Brushing the Sky,” which is reminiscent of the sounds and images that many Koreans associate with bamboo.

Performances begin at 8 p.m. today, tomorrow and Friday, and at 3 and 7 p.m. on Saturday and Sunday.

GOING AROUND THE CIRCLE TO FIND YOUR FATHER

Thursday to Sunday: This acrobatic play was invited to participate in the Milyang International Play Festival and Ujeongbu Play Festival before it even opened. It features demonstrations of juggling and an Egyptian dance and incorporates forms of traditional Korean theater, music and dance.

The eye-catching poster by photographer SATA, which features all six cast members in the buff, is almost worth the price of admission.

Friday to Sunday: Hoobastank, LCD Soundsystem and Stereophonics are scheduled to play at this year’s Pentaport Rock Festival, which is celebrating its fifth anniversary.

Throughout the three-day festival period, 70 musicians and DJs from Korea and abroad - including DJ Soulscape, Deeizm, Vesper MJ, and DJ Yoda - will be playing day and night on three different stages.

For the past four years, the festival has been held in Citizen’s Forest in Song-do, Incheon, but this year, the festival welcomes rock music fans in its new venue in Incheon Dream Park.

From Seoul, take subway line No. 5 to Gimpo Airport Station and transfer to Incheon Airport Railway to Gumam Station. Then take a free shuttle bus to Incheon Dream Park.

KNUA Hall at the Korea National University of the Arts

July 26 to July 30: Experts in percussion from more than six countries will perform at this festival, which is designed to promote the development of percussion.

The festival offers audiences a good chance to learn about the development of Korean percussion.

The concert starts at 8 p.m. on all five days.

July 28 to Aug. 1: This water-themed festival is designed for people who are looking for water parks to avoid the hot summer weather.

Taking place near Jangheung County, which has the Tamjin River and Jangheung Dam, it aims to educate people about the benefits of nature and the importance of water as well as the things that a rural community can offer urban crowds.

The festival also has a program of water sports including beach volleyball, water bike riding and rubber boats as well as a variety of exhibitions on how the local government has systemized its water management.

From Seoul, take the KTX from Yongsan Station to Gwangju. Transfer to a bus heading to Jangheung.

BEACH PARTY ON ONE SUMMER NIGHT

July 20 to Aug. 9: As the rainy season ends, the Korean Peninsula is about to be hit with tropical nights this week, according to the National Weather Service.

Banish your thoughts of the hot weather at this festival on Jeju Island.

Visitors can attend performances by popular artists such as singer Lee Eun-mee and baritone Ko Sung-hyun and other well-known local artists.

There is also a small jazz festival within the main festival.

From Seoul, take a plane from Gimpo Airport to Jeju.


Event information is culled from the Korea Tourism Organization and other online sources.