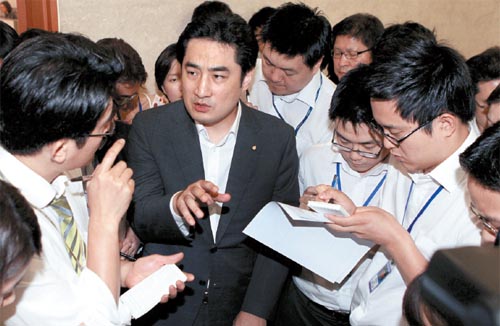 Kang Yong-seok, 41, a first-term lawmaker representing the Mapo B District of Seoul, allegedly made inappropriate remarks, including one involving President Lee Myung-bak, at a dinner last week with about 20 university students, about half of them female.

The ethics committee of the ruling Grand National Party yesterday decided to expel Kang from the party.

After a national university debate competition, Kang had dinner at a restaurant near Hongik University around 7 p.m. on Friday. Students present at the dinner told the JoongAng Ilbo on Monday that Kang made what they considered to be crude comments. The detailed exchanges between Kang and students were reported by the newspaper’s Tuesday edition, and Kang held a press conference yesterday to refute the entire story.

“I have never said any of the things mentioned in the article, including the part about the president,” Kang said. “I will put my political career on the line and lay bare the truth. I will take all necessary legal actions.”

According to the JoongAng Ilbo, Kang made several inappropriate remarks at the dinner with the students.

“The debates judges actually do not listen to the debates. They just look at the faces of the participants,” Kang was quoted as saying by one person who attended the dinner. “I will give you a recommendation on how to form a good debate panel. Two ugly people and one pretty person are the best. That will make the judges pay attention.”

Kang was also quoted telling a female student, who said she wants to become an anchorwoman, “You have to be prepared to go all the way. Can you still do that?”

The lawmaker said women who graduate from prestigious schools often refuse to “go all the way” because of their pride.

“His remarks gave an impression of sexual favors in return for career advancement,” said a student who was at the dinner. “I felt very uncomfortable listening to him, and you can imagine how upsetting it was for the girl he was talking to.”

Another student also complained. “I attended the debate as a part of a self-development effort. But Kang said the judges made their evaluations not based on performance, but appearances, and it is a great disappointment. I felt insulted.”

Kang also reportedly made inappropriate remarks to a female student about her Blue House visit last year. Kang had accompanied her during the visit.

“At the time, the president only looked at you,” Kang was quoted as telling the student. “All men are the same. They all like pretty women. If the president’s wife wasn’t there, he probably would have asked for your phone number.”

Asked on Monday about the students’ account of the dinner party, Kang told the JoongAng Ilbo that he did not say anything that made the students feel uncomfortable. “Democratic Party Representative Jeon Hyun-heui joined the dinner about five minutes after my arrival,” he said. “She knows what happened.”

Jeon, however, said she arrived at the dinner about one hour later. “I had no chance to talk to Kang directly,” she said. “We drank during the dinner, but Kang was not drunk.”

Another student also said Jeon arrived about an hour later.

In his press conference yesterday, Kang called the JoongAng Ilbo report a fabrication. He said the two female students quoted in the report - one who dreams of becoming an anchor woman and another who had visited the Blue House last year ? were actually the same person, but the reporter wrote the article as if she was two different persons.

Kang also said he had telephoned two of the four students at the same table to find out how the story spread. Stressing that the students had backed his innocence, Kang threatened defamation suits against the journalist and the newspaper.

But Joo Seong-young, deputy chairman of the GNP’s ethics committee, said in a press conference yesterday, “The committee checked the allegation and decided to expel him from the party as Kang significantly damaged the party’s dignity.” Out of 11 ethics committee members, seven participated in the disciplinary deliberation and all of them approved the expulsion.

Kang cannot regain party membership for five years if a general meeting of GNP lawmakers approve the punishment. Two-thirds of the GNP’s lawmakers must uphold the decision.

The Blue House yesterday refrained from making an official comment on the scandal. Asked about the presidential office’s position, Blue House spokeswoman Kim Hee-jung shook her head during a briefing yesterday.

”It is the least that the GNP can do to show respect to the people by kicking Kang out of the GNP,” said DP spokesman Woo Sang-ho. “When will it be possible for the Grand National Party to escape from its embarrassing nickname of ‘Sex National Party’?”

It is not the first time that the conservative ruling party has been embarrassed by a sex scandal.

In 2006, Choi Yeon-hee, who was a three-term lawmaker and GNP secretary-general, was accused of sexually molesting a female journalist at a dinner.

Choi left the GNP in the aftermath of the scandal but finished his term in the assembly. He was reelected as an independent lawmaker representing Donghae and Samcheok in Gwangwon in 2008 elections.