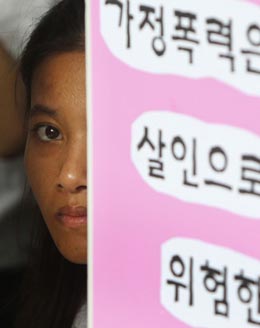 A group of migrant women by marriage stages a protest rally yesterday in front of the National Human Rights Commission in Seoul. [YONHAP]

Koreans trying to wed foreigners will have to take prior education courses about international marriages, and those who fail to attend will be denied visas for their brides, the Ministry of Gender Equality and Family announced Tuesday.

The measure was the latest move by the Korean government to protect foreign spouses following the murder of a Vietnamese woman by her mentally-ill Korean husband this month.

Thach Thi Hoang Ngoc, 20, was beaten and stabbed to death in her home by her 47-year-old husband, just eight days after arriving in the country. The two had met through an international matchmaking service, which failed to check the man’s past record of mental illness.

In other efforts, the ministry has pledged to step up monitoring of matchmaking agencies and is considering establishing non-profit agencies for international marriages.

“We promised to set up measures to prevent such an incident from occurring again,” the Minister of Gender Equality and Family said in a press release.

Under the policy drawn up with the Prime Minister’s Office, the Ministry of Foreign Affairs and Trade, the Justice Ministry and the National Police Agency, among others, Koreans looking to wed foreigners will be required to receive cultural education on living with a foreigner. Those who fail to attend the courses will be denied a visa to the countries of their future spouses. Also, F-2 visas for foreign spouses entering Korea will be issued only when their Korean partners have taken the courses, the ministry said.

The government will also examine financial and health conditions, marriage histories and criminal records of Korean spouses. Those who have records of multiple divorces, domestic violence, or financial or mental problems will be denied visas.

Counseling services will be expanded for foreign wives, and information on the ministry’s Web site will be offered in different languages.

Many South Korean men, mostly from farming villages where gender imbalance has become more and more pronounced, search for wives through matchmaking agencies. One out of every 10 marriages last year - 33,300 out of 309,759 (10.8 percent) - were international marriages, most of them between Korean men and women from China, Vietnam or the Philippines.