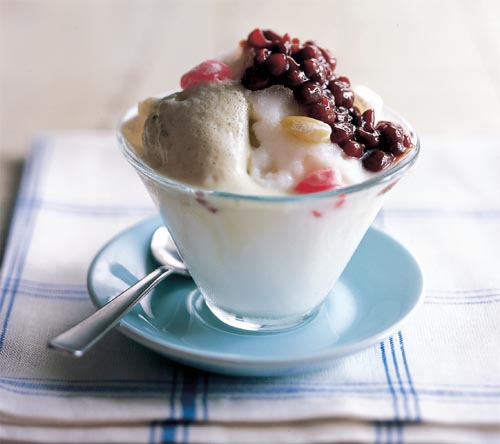 
Park Shin-hae, 35, remembers the first time she had a bowl of patbingsu, a traditional shaved ice dessert topped with sweet red azuki beans, as an 8-year-old girl.

“My grandmother had made a bowl for me at home, very simple, with just shaved ice, azuki beans, tteok [rice cake] and milk,” she said, as she ordered a bowl from Kim Young-mo Bakery in Seocho District, southern Seoul. “I was used to cheap ice cream from convenience stores back then and patbingsu felt like such a refined, adult dessert. I ended up getting sick after having too many bowls.”

During the summer, there are few things that Koreans want more than a bowl of patbingsu. According to records, the icy dessert originated in the Joseon Dynasty (1392-1910), when government officials used to smash ice blocks from seobinggo, or government-run icehouses, to make the summer treat.

In contemporary culture, patbingsu is a much more elaborate dessert, with numerous variations on the basic combination of shaved ice and azuki beans. In addition to the beans, today’s patbingsu (“pat” means azuki beans in Korean, while “bingsu” is ice flakes) is topped with ice cream or frozen yogurt, sweetened condensed milk, fruit, syrup, small pieces of jelly, cereal flakes, tteok or other toppings. Patbingsu can even be found in variety of flavors, such as green tea bingsu and coffee bingsu.

The dessert is a prominent Korean street food item in the summer, and it can easily be found on almost every street corner in major cities, in bakery shops, restaurants and even in fast food chains and cafe franchises.

Richemont Bakery, which has branches in Mapo District, Seoul, is one of the more well-known spots for traditional patbingsu. The bakery offers only two varieties, traditional patbingsu and nokcha (green tea) bingsu. These bingsu are famous for making its azuki beans made fresh every day and the dry roasted nuts it uses as a topping.

“A bowl of patbingsu and a sweet pastry make a perfect combination on these hot summer days. Aren’t they picture-perfect?” Oh Myung-hwan, a customer at the bakery the day we visited, said as he pointed to a tray of colorful pastries and a bowl of nokha bingsu. 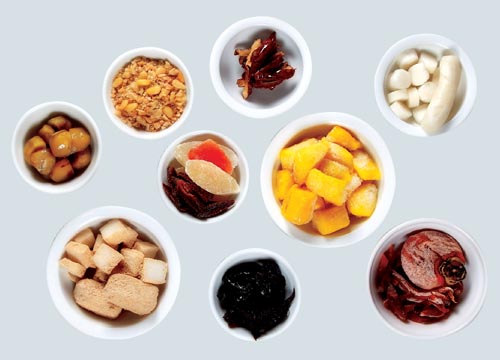 As the dessert evolved, large franchises began putting their own spin on the dish to satisfy the tastes of their changing clientele. In 2007, Starbucks Corp. introduced a Red Bean Frappuccino inspired by patbingsu. The blended ice beverage is served at more than 2,100 Starbucks stores in 10 countries, including Korea, Japan, China, Taiwan and Hong Kong.

Although an ordinary patbingsu can be found everywhere, an “exceptional” patbingsu, according to old-school patbingsu lovers, can only be found at a few sites.

Meal Top, located on the fifth floor of Hyundai Department Store in Apgujeong, southern Seoul, has been serving up high-quality bingsu since 1985. During the hotter months, the cafe is always busy. Groups of families and children fill the space in the afternoon, while couples are more likely to dine in the evening. Although the menu offers a variety of desserts, such as danpatjuk (sweet red bean porridge), fruit crepes and chocolate parfait, the employees say that more than 80 percent of diners order patbingsu. The most popular patbingsu flavor at the cafe is milk bingsu. It is a simple bingsu made of milk, sweet condensed milk, ice shavings, sweetened azuki beans and pieces of tteok.

The cafe boils the azuki beans used in the bingsu fresh every day and many customers comment that the taste of the beans is unforgettable. The cafe also offers free refills of azuki beans and tteok.

The Miss Lee Cafe in Insa-dong, Seoul, is a great place for a romantic summer night. The retro decor has a wall of timeworn photos, antique wooden tables and worn menu books.

“I feel like I’m reminiscing, not just eating a dessert,” Kim Hae-na, a regular customer at the cafe, said.

The timeless atmosphere is also reflected in the cafe menu. The cafe’s patbingsu comes served in a worn-out naembi, or pot, which, because of its size, has room for more toppings.

“Taste is not only about the act of eating, it is about the atmosphere in which food is eaten,” Shin Wook-sun, the owner of the cafe, said.

During the summer, the Miss Lee Cafe sells more than 250 bowls of patbingsu a day, although Shin says that customers order naembi bingsu all year round.

“I prefer patbingsu over regular ice cream desserts, because it makes me feel like a healthier eater,” said Lee Hyun-ah, a student at Sookmyung Women’s University. Lee says that she eats patbingsu at least three times a week during the summer.

Lee is not alone in touting the health benefits of patbingsu over Western desserts.

Park Hae-jin, an employee at a branch of the Paris Baguette bakery in Mok-dong, northern Seoul, said, “The ice shavings in patbingsu give me a different feeling of fullness compared to other sweet desserts - it makes me full in a delightfully light way, because it tastes so refreshing.”

This shop offers traditional patbingsu reminiscent of the old days.

To make this popular variation on patbingsu, milk is blended with cocoa beans

Here, the patbingsu is served in a silver pot, in an elegant atmosphere with jazz music in the background.

This place may look old and worn down, but it is famous for its delicious old-fashioned azuki bean treats. It serves patbingsu during the summer and danpatjuk (sweet red bean porridge) during the winter.