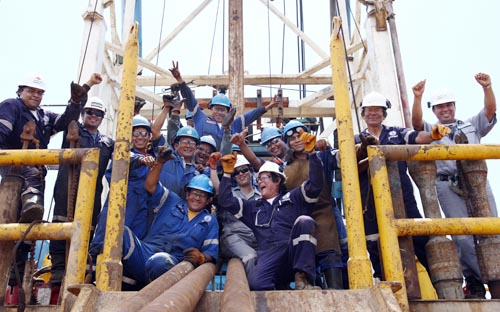 Employees at the Savia-Peru factory gather to celebrate the company’s successful oil production efforts. Provided by the company

One of Korea’s greatest needs going forward is to secure a safe, steady supply of oil to fuel the country’s massive economy and thriving culture for years to come. The nation ranks as the fifth-largest country in terms of oil imports and the ninth-largest consumer of crude, highlighting the importance of the natural resource to development.

Recognizing the importance of the situation, the Korea National Oil Corporation?is working to develop oil reserves overseas - particularly the Middle Asia, Africa and South America. The idea is to reduce dependency on specific countries for oil and expand supply sources. Securing resources abroad and developing them independently is much more favorable than simply importing oil from abroad in terms of security in supplies and cost. This is a primary reason behind KNOC’s efforts to promote the oil development business. It has identified this as a key strategic area and is working on 47 overseas projects in 17 countries as of April 2010.

The company is also looking to expand quickly, with officials hoping it will become an even bigger player in the global scene and eventually produce 300,000 barrels of oil each day by 2012.

To become a heavyweight in international oil production, it is vitally important to become a large entity because of the competitive nature of the industry. Larger companies enjoy economies of scale and have better bargaining power. They also can ink strategic partnerships with leading oil-producing countries and maximize their resources by packaging various projects together.

The Korea National Oil Corporation has been growing at breakneck speed in recent years, boosting its reserves to 880 million barrels and its production rate to 128,000 barrels as of December 2009 from 540 million and 50,000 barrels, respectively, in 2008. The portion of oil that it develops independently has jumped to 9 percent of the total from 4.2 percent in 2007. It also has completed numerous mergers and acquisitions with foreign oil firms including Savia-Peru in South America, Harvest in Canada and Sumbe in Kazakhstan, among other deals.

By diversifying its business, KNOC is aiming to become one of the world’s largest oil companies, with production of 500,000 barrels a day by 2018.