[Sponsored Report] K-water improving lives, a stream at a time

[Sponsored Report] K-water improving lives, a stream at a time 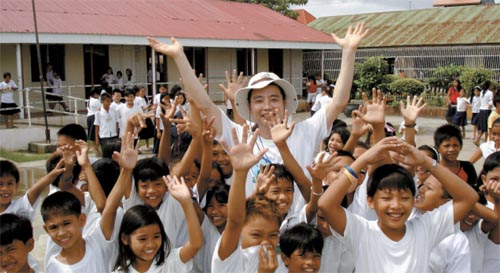 K-water employees perform overseas social contribution work at a school in the Philippines. Provided by the company

With the tagline “Water for a Happier World,” the Korea Water Resources Corp. is promoting a variety of programs aimed specifically at the environment, including efforts to clean up streams and rivers.

The idea is to create a “clean water network” by improving water quality and spurring related initiatives in conjunction with the public. This ranks as one of K-water’s primary social contribution activities.

Under the program, K-water has cemented an agreement with the Korean Open Doctors Society to utilize medical volunteers to improve the health of residents living near dams who don’t have access to quality health care. This activity encompasses regions surrounding 10 dams across the country. The Jinju Namgang Dam event on March 28 was held at the Hyo Nanum Center, which was built last year, and focused on providing medical aid to elders living in the region. The company plans to expand this voluntary activity to 20 dams in the region.

It is also conducting overseas social contribution work in countries that face severe water shortages. K-water started its voluntary work abroad in Tajikistan back in 2006. It followed that up with a project in Cambodia and then brought its idea of philanthropy to Mongolia. In 2008, it helped provide drinking water in four towns in Vietnam. It has built a well for a remote school in the Philippines and spearheaded a project to construct a water facility for five towns in Laos. This year, it plans to continue backing projects in East Asian countries.

K-water is also leading efforts to help get the local economy back on track, moving to create new jobs and get people back to work. The company has hired 620 housewives under the age of 65 to work at its local business centers and has provided services for elderly Koreans who live alone and have a hard time moving around.

“As a public company, we will work hard to fulfill our social responsibility,” said K-water CEO Kim Kuen-ho.