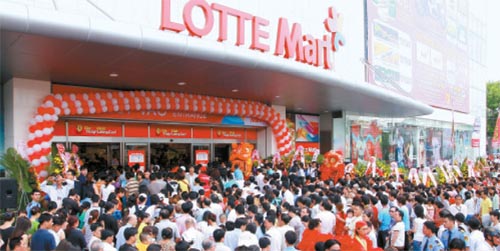 A large crowd waits to get into a Lotte Mart discount store in Vietnam on July 1. [NEWSIS]

Over the past few decades, local companies eyeing growth could look in their own backyards to find burgeoning markets as the nation’s economy boomed.

But more of Korea’s leading conglomerates and small firms alike are now setting their sights abroad for new opportunities as the domestic market becomes increasingly saturated, according to industry sources.

In a bid to stay competitive, companies in a wide array of sectors including information technology, steel, finance and retail are aggressively investing abroad and developing new marketing plans to expand their presence in the global market.

Observers say these moves are key if Korean companies want to maintain and increase their market share going forward. Failure to expand successfully overseas, they say, could be detrimental in the long run.

“In order to be competitive in the global market, it is essential for firms to focus on the changing technology paradigm, analyze the market and conduct aggressive research and development, as well as invest and obtain resources,” said an official from the Federation of Korean Industries. “Local firms are looking for global business strategies in order to minimize risk and quickly and effectively respond to the changing trends of global market.”

To get an idea of the importance companies are placing on the global scene, look to Samsung Electronics, the world’s No. 2 maker of mobile phones after Nokia. The Korean company is aggressively promoting its new Galaxy smartphones and 3-D televisions overseas. The same goes for its semiconductors and liquid crystal display (LCD) products.

It’s an important strategy, particularly in the area of smartphones. Although Samsung is a giant in the mobile phone industry, controlling about 21 percent of the global market, it ranks just fifth in the emerging smartphone sector with a mere 4 percent share.

To wade deeper into the market, Samsung Electronics introduced its newest Galaxy S device in New York City - its first overseas market for the smartphone. And early this month, Samsung Electronics Chief Executive Officer Choi Gee-sung embarked on a two-week business trip to the United States to support the company’s overseas team.

Posco, the nation’s leading steelmaker, has been aggressively expanding its operations worldwide, opening a new plant in Vietnam last year.

Shinhan Financial Group, Kookmin Bank and BC Card are also introducing global services in the financial sector, while giant retailers Shinsegae and Lotte are opening more branches abroad and seeking mergers and acquisitions.