[In-depth interview] Giving her all to build bridges

[In-depth interview] Giving her all to build bridges 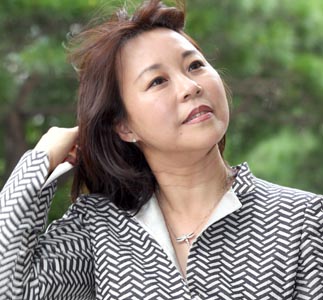 When the Korean American Community Foundation (KACF) held its second “Building Bridges Gala” in 2007, it was attended by UN Secretary General Ban Ki-moon and the Mayor of New York City Michael R. Bloomberg.

The gala underscored the growing influence of KACF, a non-profit organization of Korean immigrants and first-generation Korean-Americans that raises and distributes funds to social service organizations for the Korean-American and Asian communities.

When KACF held its most recent gala, it attracted A-list Korean-Americans, including Juju Chang, a news anchor at ABC, Su-chin Park of MTV and Jeannie Park, then the chief editor of People magazine, along with figures from the political, media, finance, law and business sectors.

“Mayor Michael Bloomberg’s presence at the event is meaningful,” said Yoon Kyung-bok, 53, KACF executive director. “It’s rare for such a prominent political figure to make an appearance at a Korean event. We raised a total of $600,000 from the event.”

Yoon has the distinction of being the first Korean-American broadcast reporter in New York.

Yoon came from a family of diplomats and moved to the U.S. when she was six, later living in France for three years. She graduated with a degree in International Business from Wesleyan College and then earned a master’s degree at the Johns Hopkins School of Advanced International Studies. She first worked at the World Bank and then switched careers to television journalism in New York.

She went on to create and host Global Links Television, an international TV documentary series focusing on economic and social development issues, sponsored by the World Bank.

“Korea is a country which rose from the ashes of the Korean War. I was curious about the development of education and economy in other developing countries,” said Yoon.

Yoon, who has a black belt in Tae Kwon Do, lives in New York with her husband, George Wang, a lawyer, and their two sons Brian, 17, and Matthew, 15. Yoon sees the importance of passing on tradition and culture to the next generation.

“I speak a bit of Korean, but my children do not,” Yoon said. “Like most first generation Korean-Americans, I felt an urgent need to do something about my Korean heritage, which often fails to be passed on to the next generation. That’s the biggest reason why I got involved with KACF and plan to continue to do so. A decade from now, my sons will join the executive committee of KACF.”

Yoon has held her post as executive director since 2008, but joined the organization when it was first formed in 2002.

“I had been invited to the residence of Cho Won-il, the Korean counsel general in New York, and there were about 30 other Korean-American professionals there. About 10 of us decided later that we should get together to do something for the Korean community.”

KACF decided to act as a bridge between older Korean immigrants and the younger generation of Korean-Americans, as well as reaching out to other Asian communities.

“We held our first Gala in 2006 in an effort to support the Korean-American community in midtown Manhattan,” said Yoon. “A total of 750 people attended the event. We raised a total of $500,000.”

For the Gala held last November, which was co-hosted by Juju Chang and Su-chin Park, a total of 1,000 people attended. Dr. Jim Yong Kim, the president of Dartmouth University, was the keynote speaker.

As KACF continues to grow, it is receiving more support from the Korean community, including PGA golfer Choi Kyung-joo.

At the inaugural KACF Golf Classic featuring Choi at the Harbor Links Golf Club in Port Washington, New York on June 14, a total of 24 participants paid $2,000 a head, to “improve lives and strengthen the Korean-American community of greater New York and New Jersey.”

Having benefitted from the sacrifice of first generation immigrants, the second generation of professional Korean-Americans needs to learn to give back to the community, Yoon believes.

“With over a hundred-year history of immigration to the United States, it is now time for some changes to take place,” said Yoon. “Our parents’ generation had to engage in manual labor in a new environment, even though they were well-educated.

But they raised their children well and have produced a generation of young professionals. Having grown up with the fruits of such sacrifices, we need to take a different approach, a different vision. We must become a generation which volunteers and gives back to the community.”

The Korean-Americans that Yoon met often lacked a sense of unity. “We had all succeeded in our respective fields but were like individual droplets of water. We are now joining many drops together to create a tsunami, but if we don’t have a bucket to gather such talents, they will disappear. It is the vision of KACF to act as a bucket to collect that water,” Yoon said.

Yoon sees a bright future ahead for KACF. One example Yoon points to is the “dollar a day” campaign, started in 2003 to help the needy. Like other KACF initiatives, donations have steadily increased over the years.

She is especially encouraged by the involvement of second generation Korean-Americans.

“We have an executive committee consisting of 30 second-generation Korean-American professionals between the ages of 25 and 35. Since they were born in the United States, most of them do not speak Korean well but whenever KACF needs them, they eagerly help with 70 to 80 volunteers. It’s touching to see young people find their roots and volunteer for a good cause.”

KACF is not an organization limited to helping Korean groups. It lends support to 24 organizations located in the heart of New York City, such as the Asian American Student Advocacy Project, the New York Asian Women’s Center and the American Cancer Society.

Throughout the interview with JoongAng Sunday, Yoon stressed that her personal story alone was not the focal point of KACF, whose founding members, executives and other staff members are the pillars of the organization.

“When you look at other organizations, you usually see one prominent figure leading the group, and without that person, the organization collapses. We’re different. We work together as a group, right down to the volunteers.”