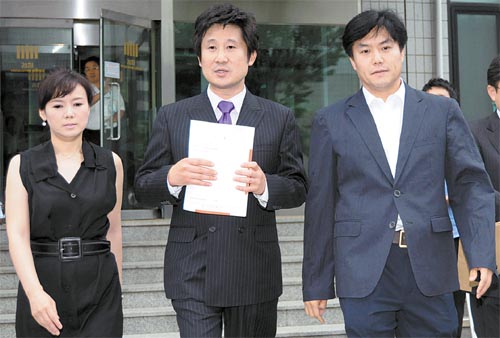 Representatives of the Korea Association of Announcers file a petition at the Seoul Southern District Court yesterday against lawmaker Kang Yong-seok. From left: Kim Seong-eun (KBS), Seong Se-jeong (KBS, chairman of the association) and Lee Jae-yong (MBC). By Kim Da-hye


A group of students who attended a dinner with disgraced Grand National lawmaker Kang Yong-seok last week confirmed yesterday that the lawmaker made sexually inappropriate remarks, corroborating an earlier JoongAng Ilbo report that has rocked the nation.

The 41-year-old first-term lawmaker has found himself in hot water after the JoongAng Ilbo reported on Tuesday that he made lewd remarks at a dinner with university students last Friday. Kang denied the accusation and threatened to sue the newspaper.

But the ruling party kicked him out yesterday, and both ruling and opposition lawmakers are now trying to eject him from the National Assembly.

“After Kang held a press conference [Tuesday to deny the report], the race to uncover the truth heated up,” the students said in a statement released yesterday. “We tried to find out what had happened, and that was why we needed time before making public our position.”

“Kang did make the remarks quoted in the JoongAng Ilbo’s Tuesday report,” they said. “On the same afternoon, Kang called a press conference and mentioned a phone call he had with a student at the dinner. Kang’s telephone conversation with the student, however, was different from what he said during the press conference. We are very regretful about this incident.”

Kang was quoted by students at the dinner party as telling a female student who wanted to become a television anchorwoman that she’d have to be prepared to “go all the way” to succeed in the profession.

He told another student who visited the Blue House that President Lee Myung-bak probably would have asked for her phone number “if the president’s wife hadn’t been there.” About half of the 20 students at the dinner were female.

At his press conference, Kang said the students backed up his account of the dinner, and threatened a defamation suit against the JoongAng Ilbo.

Yonsei University said yesterday that it will launch an investigation because some of its students attended the dinner. “We will verify the accounts that appeared in the report and come up with appropriate measures,” said Professor Ahn Kang-hyeon, Yonsei’s dean of student affairs. “Since Yonsei students suffered from the incident, the school needs to take action.”

The Democratic Party yesterday submitted a petition to the National Assembly’s Special Committee on Ethics to hold Kang responsible for the scandal, and the Grand Nationals agreed with the opposition party to remove him from the legislature.

In an attempt to contain the situation ahead of Wednesday’s by-elections, the GNP ousted Kang from the party yesterday.

“Kang’s alleged remarks are an insult to a female university student in her 20s and working anchorwomen,” the Democrats said in a petition. “He also described the president as a lewd man. We cannot believe these unethical and immoral remarks were made by a lawmaker.”

The DP also accused Kang of trying to conceal what had happened by pressuring students from the dinner.

“I received a phone call from a parent [of a student who was at the dinner], complaining that Kang was calling the family repeatedly,” said DP spokesman Representative Noh Young-min yesterday in an interview with the PBC network.

“The parent said Kang’s phone calls are perceived as threats and coercion, angrily saying they were suffering a second crime,” Noh said.

Kang reportedly called the students one after another.

Meanwhile, an advocacy group for newscasters yesterday filed a petition to the prosecution to investigate Kang for defamation of anchorwomen.

Four representatives of the Korea Association of Announcers, including its chairman Seong Se-jeong of KBS, visited the Seoul Southern District Court and submitted a petition.

“Kang’s remarks are extremely regretful,” Seong told reporters. “Because he made sexually discriminatory comments about women in a certain profession, we are filing this petition.”

He also demanded an apology and called for Kang’s resignation from the National Assembly.