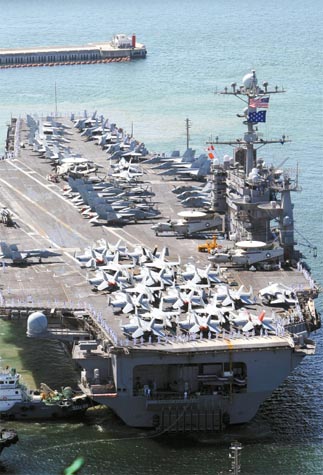 The nuclear-powered aircraft carrier U.S.S. George Washington arrives at port in Busan yesterday. The aircraft carrier will participate in a massive combined air and naval exercise to be held by Korea and the U.S. in the East Sea from July 25 to 28 in a show of deterrence to North Korea. [NEWSIS]

U.S. Secretary of State Hillary Clinton announced new sanctions on North Korea yesterday at a high-profile meeting among the foreign affairs and defense chiefs of South Korea and the U.S.

Clinton said the sanctions were primarily aimed at North Korea’s nuclear program and preventing proliferation, but were also related to the Cheonan sinking in March.

Clinton said the U.S. will freeze the assets of individuals from the North that support the regime’s proliferation and North Korean companies engaged in illegal weapons trading.

Stricter sanctions will also be put on overseas travel of North Korean individuals, in particular those involved in nuclear proliferation, she said.

The new sanctions, to be added to existing sanctions under UN resolutions 1718 and 1874, will be implemented when Robert Einhorn, U.S. special adviser for nonproliferation and arms control, visits South Korea soon, Clinton said.

Clinton, however, noted the new sanctions are directed at the authoritarian regime of the North, not directed at its people, who, she said, have “suffered too long due to the misguided and malign priorities of their government.”

She promised that the sanctions would be lifted, energy and economic assistance would be provided, and relations between the U.S. and North Korea would be normalized if the North takes “irreversible steps” toward denuclearization.

The announcement of new measures against the North came at a time when the reclusive regime is hinting it could return to six-party denuclearization talks that have been stalled since the North’s withdrawal in April 2009.

South Korea and the U.S. remain cautious about the sincerity of those suggestions, suspecting they may be aimed at avoiding responsibility for the deadly sinking of the South Korean warship Cheonan on March 26, which killed 46 sailors.

Citing a July 9 UN Security Council Presidential Statement, Clinton stressed that the North still owes an acknowledgement of its responsibility for the Cheonan sinking. A full-fledged discussion of the resumption of the six-way talks, she said, will be held if “North Korea takes certain steps that would acknowledge its responsibility or would demonstrate their commitment to irreversible denuclearization on the Korean Peninsula and would end provocative, belligerent action.”

The 2+2 meeting, which lasted around two hours in the afternoon, was the first of its kind for South Korea. The meeting, agreed to during the Seoul-Washington summit in November 2009, came at a time of increased tension on the peninsula as the two countries strengthen their “blood alliance” after marking the 60th anniversary of the start of the Korean War.

A day earlier, Gates and Kim met one-on-one and confirmed detailed plans for South Korea-U.S. joint military drills. The drills, which are a show of protest over the Cheonan sinking and a warning against further provocations by North Korea, will start Sunday and will be carried out for months to come, they said.

North Korean television denounced the naval and air exercises after plans for the drills were reported on Tuesday.

James Clapper, a top U.S. defense official dealing with the Korean Peninsula in the 1980s, warned yesterday (Korea time) that the Cheonan incident may be followed by additional direct attacks by Pyongyang on the South.

“There is uncertainty about further provocation,” said Gates, referring to Clapper’s comment. But, Gates said, Seoul and Washington have recommitted themselves to taking steps to further strengthen their deterrence.

“The two countries committed to maintain a robust combined defense posture capable of deterring and defeating any and all North Korean threats,” a joint statement from the 2+2 meeting said. They said further 2+2 meetings could be held as necessary.