On national test, some teachers helped too much

On national test, some teachers helped too much 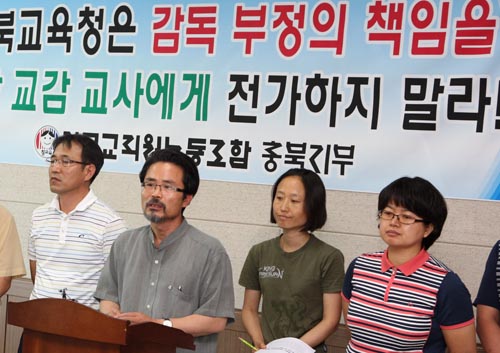 A union charges yesterday that some teachers helped students cheat on the national assessment test. [YONHAP]

The national assessment test last week made headlines after liberal teachers, who oppose the Education Ministry’s effort to test all Korean students, encouraged pupils to skip the test.

But there were some teachers who did everything they could to ensure that their students excelled - including cheating.

“We have confirmed 13 cases of cheating in several elementary schools within the province,” said a spokesperson for the North Chungcheong division of the Teachers and Educational Workers’ Union yesterday during a press conference. The union said it received 20 to 30 tips last weekend from students and parents.

The union said teachers helped students select correct answers by telling them to “think again” or “go in a different direction” when answering questions that gave two possible answers. Some teachers jotted down the first letter of the correct answer or gave students verbal hints.

“We found one teacher at an elementary school who actually solved exam problems for the students in front of the class,” said the spokesperson. “From our investigation, this type of cheating took place throughout the province.”

The union demanded that teachers accused of cheating, as well as regional education superintendent Lee Gi-yong, “apologize to the students, who are the victims of this aggressive competition for grades.”

The cheating occurred because of severe pressure from the region’s education officials to push schools to achieve better grades, according to the union.

North Chungcheong recorded the lowest grades out of 16 cities and provinces in almost all subjects from grades six and nine during last year’s test.

One education official, the union spokesperson said, told vice principals and educators during a conference on June 30 that schools scoring in the bottom five percent in the region on the test would be held accountable by the education office.

“The press conference today by the union will only increase conflict regarding education in North Chungcheong,” the chief of the regional education bureau, Lee Su-cheol, said. “However, if the union provides proof to back these accusations, we will launch a formal investigation.”