Cho to focus on speed, passing

Cho to focus on speed, passing 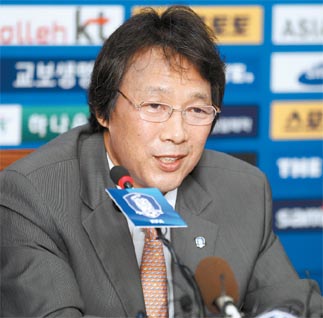 The newly hired manager of the Korean national football team said yesterday that he is focused on getting his squad to play an up-tempo brand of football that incorporates strong passing.

Cho Kwang-rae, 56, was officially named the successor to Huh Jung-moo by the Korea Football Association’s technical committee on Wednesday morning. He held a press conference at KFA headquarters in Jongno, central Seoul, yesterday morning to talk about his goals and strategy.

“The game of football has gotten quicker over the years. It’s important to be able to employ a compact game in small spaces on the field,” Cho said. “In order for Korean football to close the gap with the rest of the world, we need to improve our speed and skill level.”

“Over the past decade, I’ve consistently placed an emphasis on passing,” he said. “I see the current squad as the best national team assembled to date. However, I do have plans to add two or three playmakers to the team.”

Cho, known for his work ethic, has a deep background in the sport both as a player and manager - which made him the top candidate for the job. Having delved into organized football in his second year of high school, Cho was considered a late bloomer. Still, he went on to attend Yonsei University, earning a spot in the starting lineup his freshman year.

Cho was selected to the national team while in college and played in the 1986 Mexico World Cup with Huh. He ended his 11-year national team career with a win at the 1986 Seoul Asian Games. Cho ranks fifth in the all-time wins among managers with 141 victories. He also won the K-League title with the Anyang Cheetahs (now FC Seoul) in 2000.

“My dream has always been to manage the national team,” Cho said. “We must work on improving our skill level and on counterattacks. We also need to work on defense and inability to score in crucial situations.”

Cho will have his hands full trying to assemble a team in preparation for the 2011 Asian Cup in Qatar in January, starting with a friendly match against Nigeria on Aug. 11 in Seoul. The Taegeuk Warriors tied the Nigerian squad 2-2 in the 2010 World Cup Group B match on June 22.

Nigeria revealed its lineup yesterday for the upcoming friendly match. The team will feature some of the country’s top talent including Chelsea midfielder John Obi Mikel, who missed the 2010 World Cup with a knee injury.

According to Cho, it is still unclear whether Korea will call on its overseas-based players for the game.

“I need to consult with the technical committee on the matter,” Cho said. “It will be tough for overseas players to make the trip, but I personally think it would be great for the fans if they can play in the game.”

Cho’s team will have two more international friendly matches - against Iran on Sept. 7 and Japan on Oct. 12. But Cho’s first major test will come at the 2011 Asian Cup. Korea has not won the tournament since 1960.

While many local fans want Korea to go all-out in the Asian Cup, Cho is being more cautious in his approach.

“I will need to consult the technical committee on this matter as well,” Cho said. “If there is a consensus that we need to develop some young players for the 2014 Brazil World Cup, I will not hesitate to make major changes to the roster. On the other hand, if the goal is to win the Asian Cup, I will call on the best players available to assemble the best team possible.”