His name might be unfamiliar, but you certainly know his work. Christian Lorenz Scheurer has brought futuristic worlds to life in film, video games, theme parks and other projects.

Through his designs, audiences have experienced the sinking of the Titanic, inhabited Superman’s Fortress of Solitude and trained with Neo.

Scheurer visited Korea for the first time on Tuesday, where he shared his expertise through a lecture and digital master class at the 14th Puchon International Fantastic Film Festival in Bucheon, Gyeonggi.

Prior to his appearance at the festival, he spent three days in Seoul with his wife taking thousands of pictures of the capital city. He also took time out of his busy schedule to sit down for an interview with the JoongAng Daily. 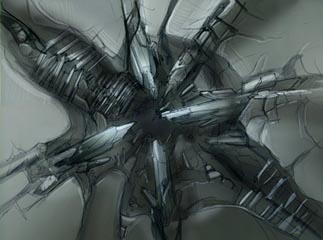 The dojo scene in “The Matrix,” top, was Scheurer’s idea. He also designed the Fortress of Solitude for “Superman Returns.” Provided by Warner Bros. Entertainment, Inc.

The son of a zoologist father and an artist mother, Scheurer and his family lived in many countries when he was growing up.

When asked about how such a nomadic existence affected his decision to be an artist and his choice of artistic projects, he said, “I did my Abitur [secondary education final exam] in math and science, but I always wanted to be an artist,” Scheurer said. “I’ve always doodled.”

His life changed forever while he was living in Brussels, Belgium, where he was studying for his masters in fine arts and visual communication at an arts institute, when he was literally struck by lightening.

He recovered after spending 10 days in hospital. After he was discharged, he made the decision to pursue his dream of working in film in Hollywood.

“I didn’t care if I failed because I was happy to be alive,” he said.

His first job was with Digital Domain, where he worked as a concept artist. Digital Domain is a U.S.-based visual effects company where American filmmaker James Cameron once worked as chief executive. 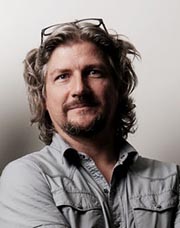 As he began to make a name for himself, he also tried his hand at other kinds of design work. He designed a book cover for children, a theme park, commercials and a variety of games, including “Final Fantasy.”

“In the past I was like ‘I’ll do only films,’ but I’ve changed my mind because of the great people I’ve met on different projects,” he said.

He said travel and nature are his greatest sources of inspiration, and he and his wife have been to four countries this year. He also said he learns a lot from his baby daughter Kiki, especially from the way she sees the world.

He had a few words of advice for those who want to follow in his footsteps.

“Give yourself time to get a really good art education,” he said. “And prepare a good portfolio, but don’t copy someone else. Let your personality shine. Then your chance will come.”