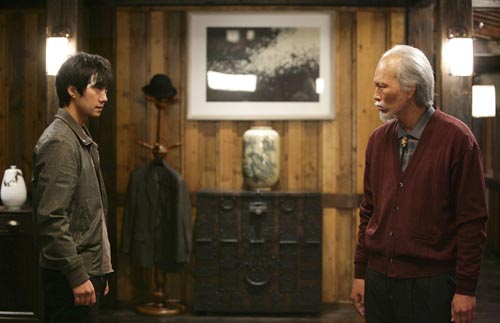 The thing about movies adapted from books or film remakes is that the movies are almost always put in a sticky, often unnecessary, catch-22 situation.

Comparisons to the original are inevitable and, more often than not, I can easily imagine the filmmaker banging his head against the wall with a speech bubble above him reading, “What was I thinking?”

Unless the original content screams for a colorful, visual re-creation, as with the Harry Potter books, I find that fans of the original work rarely have their expectations fulfilled.

This line of thought has been validated by veteran director Kang Woo-seok’s new film “Moss,” based on a popular Web cartoon by Yoon Tae-ho.

Without reading the cartoon beforehand and with no grand expectations, I watched Kang’s film and came out of the theater quite satisfied. In fact, the movie felt like a sturdy, competent thriller, and I didn’t feel the length of the two hour and 40 minute running time. After I encountered the original cartoon, however, everything went downhill.

The story unfolds during 1970s Korea in a small prayer house, in which spiritual leader Ryu Mok-hyeon (Heo Joon-ho) joins forces with a corrupt cop named Cheon Yong-deok (Jung Jae-young). The movie jumps to present time as Ryu’s son Hae-guk (Park Hae-il) visits the village for his father’s funeral and starts suspecting townspeople, especially Cheon, of being involved in his father’s sudden death.

The union of Ryu, the hailed “savior” of the villagers, and Cheon, who stands for everything that Ryu is against, is the source of the movie’s greatest tension and the foundation for its plot development. The polarity of these characters is further emphasized by the relationship between Cheon and Hae-guk - with the former trying to hide the past as the latter tries to reveal it. The web of conflicting virtues and positions poses layered questions about good and evil to readers of the Web cartoon.

But even with such a promising premise and impressive acting by Jung and Park, Kang’s half-thriller, half-mystery adaptation of “Moss” fails to add any depth to the conflicting moral dilemmas that the original cartoon successfully portrays. The characters’ inner struggles with decency and immorality are watered down in the movie, and there isn’t enough time to tell their individual stories. It was as if Kang took certain fragments of the cartoon to make a commercially-viable thriller, and left out all the elements that glued the original story together.

Unlike the cartoon, the movie glides along the surface, merely giving a superficial summary. In the end, I felt as though I were reading some bad abridged version of an epic Russian novel.