An addiction we can’t afford

An addiction we can’t afford 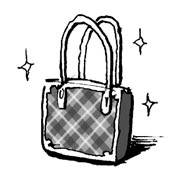 Aboard the U.S.S. Missouri in Tokyo Bay on Sept. 2, 1945, Gen. Douglas MacArthur signed the Japanese Instrument of Surrender, which was first agreed upon by representatives from Japan on behalf of the Allied Powers. It was a historic scene that ended the Pacific War.

But the attention of the people was focused on something else. “What is the brand name of General MacArthur’s pen?” they asked.

In response, the Parker Pen Company admitted that his writing instrument was theirs.

Years later, the image of Marilyn Monroe standing over a subway grate, holding down her dress as it blew up above her knees, made the film “The Seven Year Itch,” more famous for this iconic image than for the plot itself.

When the film came out, however, the attention of the women in the audience was focused on something else. They all wanted to know what brand of shoes Monroe was wearing. They were Ferragamos, and Monroe’s sexy stand turned the company into a designer label.

In Korea, Burberry remains an icon of luxury. Trench coats made by the clothier became popular among civilians after World War I.

At one stage, more than one half of the company’s product line was sold in Japan, where Japanese housewives are said to have helped save Burberry from financial difficulty.

Koreans might have given a helping hand in that regard. It’s been said that in Korea, even the homeless wear Burberry mufflers.

When I see people who are obsessed with luxury goods, I feel a little disappointed.

Recently, The Wall Street Journal declared that Korea is, “emerging as one of the most ‘luxury-friendly’ places in the world.” It reported that 46 percent of survey respondents said they spent more on luxury goods in the past year than before. It also said that those who said they felt guilty about how much they spent on luxury items totaled less than 5 percent.

Of course, designer labels sometimes go beyond the realm of simple commodities and are viewed as art objects. But the sky-high price of such beauty often goes far beyond the limits of practical use. Luxury items create social problems when people cling to them obsessively. That is the reason why Lao-Tzu, the founder of Taoism, wrote in the Tao Te Ching: “Not collecting treasures prevents stealing.”

Even people who can barely meet the minimum living standard squander their savings on luxuries they can’t afford. In psychology, this tendency to follow the crowd is known as conformity. People do what others do because they don’t want to be ostracized - or they may be trying to conceal certain shortcomings.

I believe, however, that if people could just find a way to appreciate who they are and what they have, they wouldn’t need to surround themselves with all of that superfluous luxury.