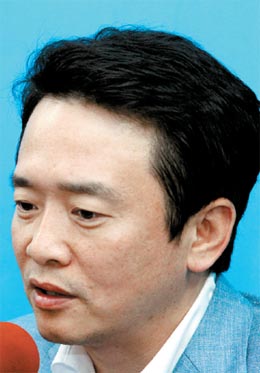 The wife of an influential Grand National Party lawmaker was another victim of the illegal surveillance scandal centered around the Prime Minister’s Office, according to the prosecution yesterday, in a widening of the Yeongpo-gate abuse of power scandal engulfing the Lee Myung-bak administration.

And opposition lawmakers said yesterday that they can only imagine how much illegal spying was done on them if the administration was even investigating its own.

Officials of the prosecution investigating the alleged illegal surveillance of a businessman in 2008 by the Prime Minister’s Office’s public ethics officers said they found evidence that the office conducted surveillance on Lee Ji, the wife of Rep. Nam Kyung-pil, in the same year.

In response to the allegation, Nam, a four-term GNP member, held a press conference yesterday at GNP headquarters in Yeouido to denounce illegal investigations of politicians.

“This case is not only about an individual, but a question of the raison d’etre of the state,” Nam said. “This is a very grave incident that can undermine the credibility of the Lee Myung-bak administration. The prosecutors must unearth the truth about how widely the illegal investigations of politicians went and who ordered such spying.”

Yeongpo-gate is a widening abuse of power scandal in which top government officials close to President Lee are accused of using their offices to harass political opponents. It started when businessman Kim Jong-ik, a supporter of former President Roh Moo-hyun, said he was investigated by the Prime Minister’s Office because he uploaded a video critical of the president from the Internet onto his blog. Kim says the investigation lost him his job and ruined his life.

The scandal is dubbed Yeongpo-gate because many of the government officials belong to a group of people from Yeongil and Pohang areas called the Yeongpo Club. (Yeongpo is an abbreviated acronym of the two areas.) The president is from Pohang.

Nam’s wife, a businesswoman, was investigated in two criminal embezzlement cases in 2007 and 2009 but was cleared in both. Nam has been quoted by friends as saying that he knew his wife’s troubles with the embezzlement cases were reported to high-profile Blue House staff and thought it strange, but didn’t know she was investigated by the Prime Minister’s Office. Such an investigation is illegal: public ethics officers are entitled to investigate public servants suspected to be involved in corruption, but not ordinary citizens.

“I sensed something strange around me in June and July of 2008,” Nam said at the press conference yesterday. “At the time, malicious rumors about me and my wife spread in political circles.”

Some political analysts speculated that the illegal surveillance on Nam’s wife might have been an act of revenge by the president’s older brother, Lee Sang-deuk, a GNP lawmaker and former National Assembly deputy speaker.

Before the 2008 general election, Nam, one of the reform-minded GNP members, urged Lee Sang-deuk not to run for the National Assembly to avoid criticism of nepotism within the GNP.

The opposition quickly responded to the prosecution’s announcement yesterday.

“If they did surveillance on a leading member of the ruling party, they surely did it on opposition party members,” said Park Jie-won, floor leader of the major opposition Democratic Party, at a party policy meeting yesterday. “We demand [the government] reveal how many opposition lawmakers have been investigated.” Park urged a probe by the National Assembly, not just by prosecutors.

Jun Byung-hun, policy committee head of the DP - and who coined the term Yeongpo-gate - urged the prosecution to find out how high the scandal goes.

“There is nobody in Korea that believes that a mere officer at the Prime Minister’s Office planned and conducted illegal surveillance all by himself,” he said. “The truth behind Yeongpo-gate, which is abuse and misuse of state power, should be thoroughly unearthed.”

On Wednesday, the prosecution filed an arrest warrant against Lee In-kyu, a senior official at the public ethics division who is a key figure in the illegal investigation of Kim, two days after summoning him for questioning. Arrest warrants for two other members of the Prime Minister’s Office staff were filed yesterday.

A court will convene a hearing to review the arrest warrants today.