Investment, not aid, is Haiti’s need

Investment, not aid, is Haiti’s need 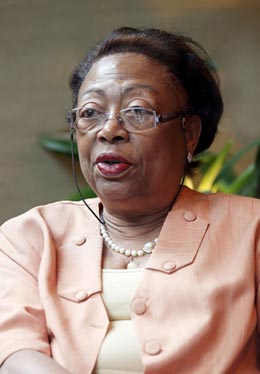 No-strings aid is still appreciated by Haiti, but what the country needs for a sustainable recovery from the devastating earthquake earlier this year is foreign investment, according to the country’s commerce minister.

In an exclusive interview with the JoongAng Ilbo during a visit to Seoul this week, Josseline Colimon Fethiere said the rebuilding of the country is entering a new phase six months after the major disaster.

“The most important thing for us now is to create jobs for the people of Haiti,” said Fethiere. “Although the international community pledged billons of dollars for reconstruction, without job creation, Haitian people will not be able to cope.”

According to the United Nations, more than 220,000 people died in the 7.0-magnitude earthquake on Jan. 12 with the collapse of more than 200,000 buildings. Many countries, including Korea, dispatched aid workers to the quake-ravaged country and pledges for reconstruction reached $10 billion.

Still, 1.5 million people, or one-ninth of the Haitian population, are living on the streets without jobs, UN data shows.

Fethiere said investment in the poor Caribbean nation is not only for charity, but can turn a profit, too.

In particular, Haiti’s textile industry provides investors with cheaper labor and easier access to the U.S. market than in other countries, she said.

She cited the Haiti Economic Lift Program, which U.S. President Barack Obama signed into law in June to assist Haiti’s textile industry, one of the biggest in the country. The program expands duty-free access for apparel made from Haitian textiles to the U.S.

“This is a good situation for people who want to invest in our textile industry,” said Fethiere.

The minister said investment in other sectors in Haiti, including technology and agriculture, can also be profitable thanks to a 15-year tax exemption for foreign investment.

Fethiere’s visit to Seoul was indeed aimed at attracting investment from the Korean government in an industrial park project in Haiti. “Haiti is a very good place to invest,” she said.