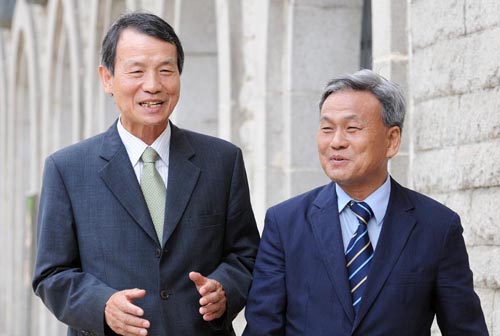 A Korean archeologist and his brother will receive today Sweden’s Royal Order of the Polar Star in recognition for their efforts to improve Korean-Swedish cultural relations.

It is not the first time that the family has received a Swedish royal order. Their father, also a noted archeologist, was awarded the Royal Order of the Sword and Vasa in 1971.

Choe Chong-pil of Sejong University and his younger brother, Choe Chong-dae, president of Daekwang International, will receive the awards from Swedish King Carl XVI Gustaf at the Swedish ambassador’s residence in Seoul.

“I’m excited and honored to receive the award with my brother nearly half a century after my father received a similar award from the royal family,” said Professor Choe, 65, said in an interview with JoongAng Daily yesterday.

The Choe family has maintained close ties with the Swedish royal family ever since Choe Nam-ju and Swedish King Gustaf VI Adolf excavated a Silla Dynasty-era golden crown, decorated with a phoenix, from a tomb in Gyeongju in 1926.

The tomb was later named in Korean the “Sobongchong (Sobong Tomb),” with “so” standing for the Chinese character of Sweden and “bong” for phoenix, and it remains a symbol of Sweden-Korea friendship.

The golden crown is National Treasure No. 339 and is displayed at the Gyeongju National Museum.

The Choe brothers said Sweden is like their second home due to their friendships with the Swedish royal family and Swedish doctors who worked at the National Medical Center of Korea during the Korean War. The doctors visited the elder Choe’s hometown of Gyeongju at the request of King Gustaf and they helped pay for Professor Choe’s college tuition.

The Choe brothers became involved in the Korea-Swedish Association, which Choe Chong-dae heads, and have served as guides for Swedish expatriates and embassy officials on tours of Korean historical sites for the past 30 years.

The Choe brothers have spent the last decade in promoting Korean culture in Sweden. In 2002, they arranged a meeting between the Museum of Far Eastern Antiquities in Stockholm and the Korea Foundation about establishing a Korean pavilion in Sweden.

Thanks to the brothers’ efforts, the Korean government and Korea Foundation decided last year to provide financial support to building the pavilion, which will open next year with over 100 Korean historical objects on display.

Choe Chong-dae says the brother’s next project is to build a park at Sobongchong.