An island paradise - of art

An island paradise - of art 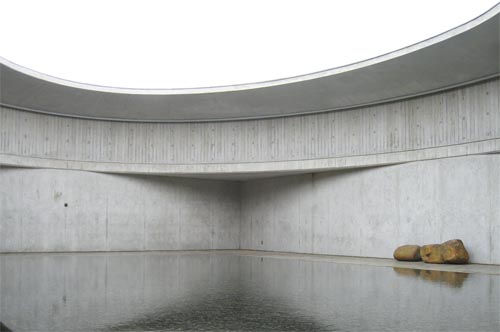 The Water Museum, designed by the Korean-Japanese architect Itami Jun, in the Pinx Biotopia resort is a space where visitors feel the various qualities of water in a meditative mood. By Moon So-young

JEJU ISLAND - Many people go to the southern resort island of Jeju to enjoy the pretty beaches, the dormant volcano Mount Halla, or sports such as golf, horseback riding and trekking. Fewer people know that the island is also a good place to see contemporary art.

Jeoji Art Village, located in Hangyeong on the western part of the island, is popular with visitors, who come here to stroll around the country lanes, gaze at the houses and visit the museum.

A total of 48 artists, including the well-known painter Kim Heung-soo and the popular singer Yang Hee-eun, live in the art village. The houses are a draw because many are designed to reflect the their owners’ tastes and personalities.

Some of the houses are hanok, or Korean traditional houses, and others are built in a modern architectural style. Some use volcanic stones unique to Jeju Island in their walls or roof tiles. Others have beautiful gardens.

Most of the outer walls are low, so it is not difficult to see over them to admire the property. Some artists even keep their gates open, so that viewers can enter and walk through the grounds. 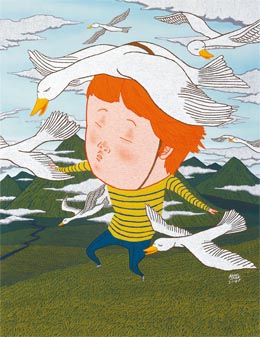 “Road” is part of painter Kang Ji-man’s solo exhibition, which continues through Aug. 10 at the Jeju Museum of Contemporary Art. Provided by Erl Gallery

At the center of the village is the Jeju Museum of Contemporary Art. This month and continuing through Aug. 10, the museum is showing a large-scale solo exhibition of works by painter Kang Ji-man. The young artist was born on the island, but works primarily in the Seoul metropolitan area. This is the artist’s first exhibition on the island.

Kang’s paintings are composed of clear lines, vivid colors and humorous human and animal figures that have some cartoon-like qualities. However, they differ from cartoons in that they have been painted with seokchae, or Korean traditional pigment made of ground stones. And many of the paintings appear to depict human solitude.

The Jeju government is planning to designate Jeoji Art Village as a cultural zone later this year. With the designation, residents will be provided with tax breaks and subsidies for cultural facilities. Korea currently has three cultural zones: Insa-dong and Dongsung-dong in Seoul and Heyri Art Village in Paju, north of Seoul.

About 30 minutes by car from Jeoji Art Village is a resort-like residential complex called Pinx Biotopia, which shares part of its name with the nearby Pinx Golf Club in Andeok, a southwestern part of Jeju Island.

The houses and townhouses within the complex were designed by Itami Jun, a well-known Korean-Japanese architect. Itami also built four museums there - the Water, Stone, Wind and Duson Museums - all of which are well worth a visit. 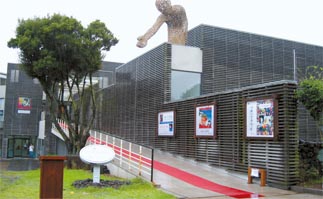 The museum in Jeoji Art Village on Jeju Island. By Moon So-young

With a name like the Water Museum, you might expect to see exhibits of various kinds of water or art works about water, yet this unconventional museum has neither.

The structure is made of exposed concrete. Its main feature is a large square floor in the center of the main “gallery” that is filled with water, except for a border that runs along the water’s edge for visitors to stand on. Overhead, a large oval has been cut out of the ceiling and is open to the sky.

Here, it is the movement of the sun and clouds that determines the nature of the water in the pool. Sometimes the water’s surface is rippled by the wind, sometimes it shines and at other times it remains shaded.

In observing these subtle but constant changes, visitors become more attuned to the water’s natural sounds and rhythms. The overall effect is highly meditative and deeply synesthetic.

The Wind Museum looks just like a long wood cabin when viewed from the outside. But upon entering the building and passing through the corridor, visitors hear the sound of the wind blowing through the gaps in the wooden planks. The interior has stones to sit on and a few well-placed stone sculptures. Outside, the building is surrounded by tall grasses and other greenery, which enhances the visual and aural experience of the wind. 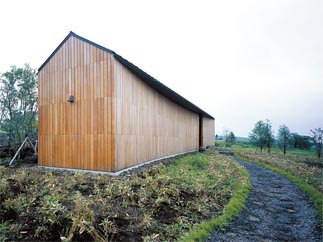 The Wind Museum at the Pinx Biotopia resort on central Jeju Island. By Kim Yong-gwan

The other museum designed by Itami, the Duson Museum, is closer to an ordinary gallery. The phrase “du son” means “two hands” in Korean and the museum gets its name from its exterior, which resembles two hands pressed together in prayer. The current exhibition is “Being a Queen” by photographer Chun Kyung-woo.

A few minutes’ walk from Duson will lead to a weekend outpost of the renowned Park Ryu Sook Gallery, which is modeled after the gallery’s main branch in the Cheongdam neighborhood in southern Seoul. It is open only on weekends.

On principle, the Pinx Biotopia is open only to residents and their companions. But those who dine at a restaurant in the community center are also allowed to enter the complex. The community center houses the restaurant, a gym and a hot springs. The complex also has an ecological park, including an 8,000-square meter pond.

Itami also designed a single-story boutique inn within the neighboring Pinx Golf Club called the Podo Hotel. The inn’s design is based on the shapes of the mountains and traditional houses on Jeju Island. Its roof looks like a bunch of grapes when viewed from above, which gave the museum its name. “Podo” means “grape” in Korean.

There is another attraction for contemporary art lovers in the northern part of Jeju Island. The Jeju Museum of Art, located in Yeon-dong, opened just a year ago. It is now holding a large-scale exhibition entitled “Close Encounter” to celebrate its first anniversary. 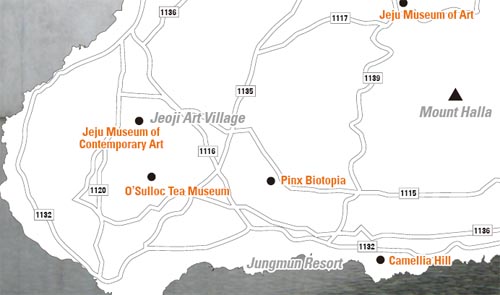 The museum is a refined building made of exposed concrete. The pools of water surrounding the building support floating sculptures, and at twilight, the shadow of the museum as it is reflected against the calm surface of the water is beautiful.

The Close Encounter exhibition, which continues until Sept. 26, features works that express the artists’ impressions and feelings about the cultures and environments they have encountered. Participating in the exhibition are renowned artists from Korea and abroad, including the New York-based environmental artist Patricia Leighton.