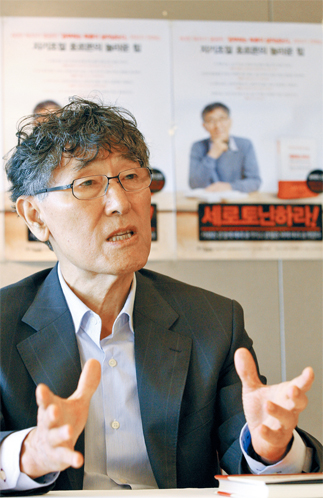 
Dr. Lee Si-hyung, a psychiatrist, professor and the author of many best-selling books, has a talent for transforming complicated scientific concepts into practical actions that can be applied to everyday life. Throughout his career, he has used that talent to serve the public.

His latest venture resulted in the publication of his 57th book, “Life with Serotonin,” in the middle of the month.

To focus his research, Lee has chosen a different field of study every five years since 1980. In the 80s, he did research on social and industrial growth and its effects on stress levels. In the 1990s, he focused on the development of the social roles of women and children and on globalization. In the 2000s, he studied cultural movements and health.

His topic for the next five years is serotonin.

“Serotonin was first spotted in the 1950s and widely used in antidepressant pills,” Lee said at a July 14 press conference held to promote his new book. “I’m researching and promoting this hormone through 2015 because it is the thing society needs the most right now. I want to help people slow down.”

Serotonin is a monoamine neurotransmitter that acts as a regulator of mood, sleep, appetite and many other functions related to people’s everyday activities. Serotonin induces happiness if a certain amount of it circulates in the body. And unlike endorphins, which induce an instant surge of happy feelings, serotonin helps people feel satisfied at a moderate level and makes that feeling last.

Lee’s interest in serotonin grew out of his experience as a practicing psychiatrist at Kangbuk Samsung Medical Center. As the number of patients with depression grew, so did his interest in the antidepressant effects of serotonin. Later, he founded a retreat center called Healience Sun Village.

The village is open to everyone and people can stay as long as they want. People usually opt for the three-day program on weekends.

When asked if this was enough time to change a person’s lifestyle, he said, “I don’t expect anyone who stays here to immediately change their chronic habits. Upon leaving, however, I think people understand the concepts I’ve tried to convey, and I think they know they can benefit from the kind of slow lifestyle they had over those three days. For now, I’m satisfied with that.”

Although he now devotes his time and energy to helping people, his decision to study medicine was neither noble nor idealistic. It was financial.

Lee came from a poor family, and after high school he decided he needed to go to college and get a job that would allow him to support his family. He decided to study medicine in college and eventually went on to get his doctorate at Yale University. It was there that one of his professors inspired him to think beyond his own aspirations and discover how he could help others.

“I always think that I owe something to society,” Lee said. “I don’t know exactly what I owe, but that’s why I need to keep studying and interact with as many patients as possible.”

These days, he is busy promoting the benefits of the slow life - not only to his patients but also in lectures to the general public. He gets invitations to give lectures at least three times a week.

“It is time for me to try reaching a more diverse portion of the population through lectures about the things I believe can lead to a higher quality of life,” said Lee.

“I feel most satisfied when hearing the applause from the audience after I’m finished,” he said, adding that he wants that moment to be his last experience on earth. “I want my life to end on my way back home after a lecture, and I believe it really will happen that way,” Lee said.

Lee had a few words of advice for people looking to slow down and live well. He suggests that people focus on the basic things they already do to maintain a healthy and happy life.

“Instinctive behaviors such as taking a one-minute break to clear the mind, chewing more while you’re eating or having more sex produces more serotonin,” he said.