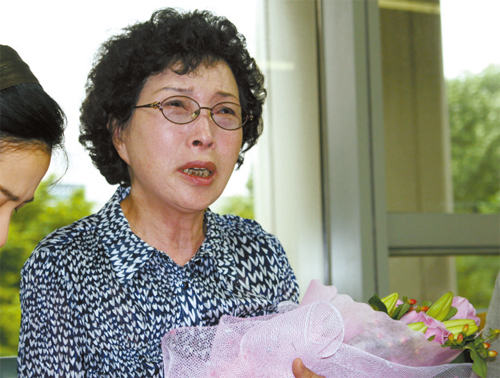 Han Hwa-ja speaks with reporters on July 16, after the Seoul High Court cleared her husband of charges of spying for North Korea. By Koo Hui-lyung


The Seoul High Court ruled on July 16 that Kim Jung-in, who was convicted of being a North Korean spy and executed in October 1985, was, in fact, innocent. The court exonerated Kim of all charges of espionage.

“Thank you, thank you so much. My husband will be really happy in heaven,” said Han Hwa-ja, Kim’s wife, who burst into tears as the decision was announced. “Thank you for finally lifting the false accusation against my husband.”

The espionage allegations can be traced back to Kim’s uncle. During the Korean War, the uncle had sided with and moved to North Korea. He returned to the South in 1964. Sixteen years later, in August 1980, Kim was an ordinary fisherman living on Jin Island when he and his family were accused of espionage. They were taken into custody by the Korean Central Intelligence Agency (predecessor to the National Intelligence Service) and tortured for two months.

During that time, the investigators tortured them severely using a variety of methods. However, according to Han, the most painful form of torture her husband endured was listening to his family members screaming as they were tortured. Investigators intentionally tortured his family members in adjacent room, with only the thin walls seperating them.

When Han was screaming in pain at the top of her lungs, her husband shouted in desperation, “Please! Don’t torture my innocent wife! I am the North Korean spy! I am guilty!”

After Kim’s false confession, his family was set free. Kim was sentenced to death and executed in 1985.

“Had I just endured the pain and not screamed, my husband wouldn’t have lied that he was a spy,” said Han. “When it [Kim’s execution] happened, we had five children. The oldest was in 10th grade in high school and the youngest was only two years old,” Han cried, recalling the moment.

Even after her husband was executed, Han did not remarry and raised all five children by herself. She did what she could to make a living, from working as a house maid to doing menial labor. She also took care of her mother-in-law until she died in 2008.

However, she could not bring herself to tell her children the truth about their father. When the family visited Kim’s grave, she told her children they were visiting their grandfather’s grave.

On one Parents’ day, the daughters wrote in the card they gave to their mother, “Mom, we all know that it’s dad’s grave, not granddad’s. Don’t make things harder for yourself by lying to us.”

Kim and Han’s sons and daughters finally came to know the truth behind Kim’s death last year as Han was preparing for Kim’s retrial.

Seong Nak-song, chief justice of the Seoul High Court, expressed the court’s regret as he handed down the decision in the Kim case.

“I cannot suppress the strong pang of regret and sorrow that an innocent life was lost due to the court’s ruling,” Seong said. He apologized to Kim’s family on the court’s behalf.