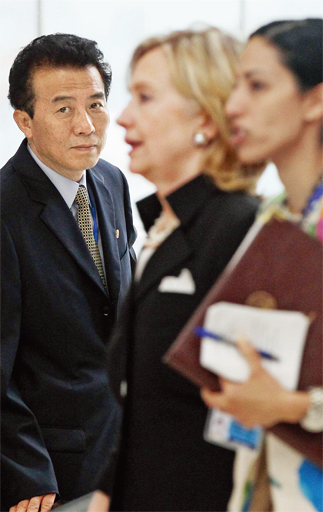 A North Korean representative looks intently at U.S. Secretary of State Hillary Clinton as she passes him in the National Convention Center in Hanoi, where the Asean Regional Forum is being held from July 19 to 23. [YONHAP]

North Korea yesterday threatened a “physical response” to an upcoming U.S.-South Korean joint naval exercise in the waters off the Korean Peninsula, calling it a violation of its sovereignty.

“There will be a physical response to the U.S. military actions,” said Ri Tong-il, spokesman of the North Korean delegation at the regional security forum in Hanoi, Vietnam. “The U.S.S. George Washington, armed with significant weapons, is joining the U.S.-South Korean joint military exercise, therefore, it is no longer a defensive drill.”

Ri said his country strongly condemns the joint military exercise because, “It is another action of hostility toward the North and it also poses a serious threat to the security stability of the Asian region.”

The nuclear-powered aircraft carrier U.S.S. George Washington arrived in Busan earlier this week to participate in a massive combined air and naval exercise to be held by Korea and the U.S. in the East Sea from July 25 to 28 in a show of deterrence to the North.

Ri’s remarks came amidst U.S. concerns about another provocation from the North. In a press conference in Washington on Thursday, Assistant State Secretary Philip J. Crowley said there is a possibility of North Korea doing something provocative against the South, which was why the joint drill was being held.

“We’ve seen a series of provocations going back a year or more. So are they capable of these kinds of steps? Tragically, the answer is yes,” Crowley said. “And the very kind of actions that we’ve announced in recent days, including military exercises that will be conducted in the near future, are expressly to demonstrate that we will be prepared to act in response to future North Korea provocations. We hope it won’t come to that.”

He warned the North to not stage provocations against the U.S. military during the drills, stressing that troops in the region are fully capable of defending themselves. “It’s a defensive exercise meant to improve our ability to work together as allies, but clearly would be very unwise for North Korea to challenge these forces,” he said.

Addressing the journalists at the Asean Regional Forum (ARF) yesterday, Ri continued to insist that the North had nothing to do with the sinking of the Cheonan warship in March, adding that Pyongyang’s Foreign Minister Pak Ui-chun has made an appeal to the forum’s participants to stress the North’s innocence.

He also said Pak spoke about the need to replace the Korean War armistice with a peace treaty. “The worsened tensions on the peninsula proved the danger posed by an armistice that continued for 60 years,” Ri said. “It proves that a peace treaty is desperately needed.”

According to newswires, South Korea was engaged in intensive lobbying for a strong statement to condemn the North for the Cheonan’s sinking.