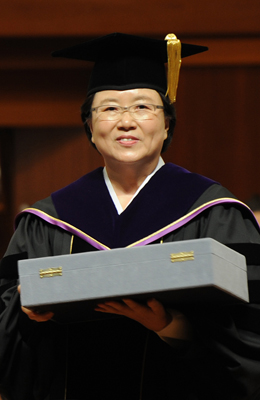 Kim Sun-uk, 57, was inaugurated as the 14th president of Ewha Womans University yesterday with roughly 900 guests present during the ceremony. The principal themes of her inaugural speech were communication and harmony within the school.

“Ewha needs to look beyond quantitative growth and competition ... the capacity of Ewha as a community will only be maximized when people, projects and all internal workings rely on democratic communication,” said Kim. “The procedure of openness, disclosure and decentralization will be implemented to ensure that all decisions are made fairly on principle.”

Kim underscored the importance of “new governance” within the school to “enhance the collective capacity of the Ewha community” and vowed to introduce more programs tailored to accommodate women’s lives.

“[Kim] has been considered a wise, industrious person of great capacity,” said school Chairperson Yoon Hoo-jung during the ceremony.

During the president selection process, Kim received the most points out of the four candidates for her “leadership in cooperation and unification,” according to the president recommendation committee.

An alumnus of Ewha, Kim graduated from the department of law in 1975. After receiving her doctorate in administrative law at the University of Konstanz in Germany, Kim graduated in 1988 and went onto a teaching career at her alma mater.

Kim was a professor of law at Ewha from 1995 and served as the head of the Advisory Organ for the National Human Rights Commission from 2007 to 2009. Kim was also an official at the committee of law education at the Ministry of Education, Science and Technology from 2008 until her inauguration as school president.

Among those who were present during the ceremony were President Lee Myung-bak’s new policy director, Baek Yong-ho, and Chairman Lee Ki-su of the Korean Council for University Education.