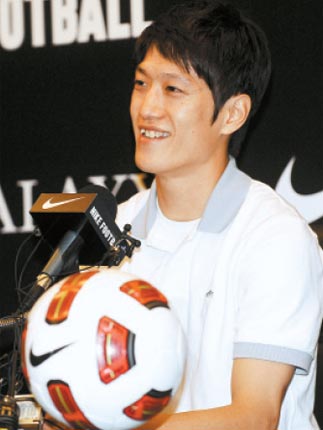 Lee fields questions during a press conference at Incheon International Airport prior to his departure to Bolton yesterday. [NEWSIS]

Despite rumors of a potential transfer, Lee Chung-yong is intent on improving his play with the Bolton Wanderers of the English Premier League in the upcoming season. Linked to speculation that he could be transferred to big clubs like Liverpool, Lee dismissed the idea and showed his loyalty to the Wanderers at a press conference at Incheon International Airport prior to his departure for Bolton yesterday.

“All players dream of playing for one of Europe’s top teams,” Lee said. “But I still have a lot to learn with Bolton. I still have many shortcomings in my game.”

Lee got off to an impressive start in his rookie season in the EPL last year by notching five goals and adding five assists for Bolton. He continued improving with the Taegeuk Warriors at the 2010 World Cup by scoring a goal in a group stage match against Argentina and adding another in the Round of 16 against Uruguay. Lee was named one of the 10 most promising players in the 2010 World Cup by Sports Illustrated.

“I’m not the type of person that sets specific goals for myself,” Lee said. “If I get to play in a lot of games, I will be able to record many goals and assists. I guess my only goal is to avoid injuries in the upcoming season.”

It’s common for players coming off an impressive rookie campaign to face stiffer competition and to hit a wall physically, wearing down in their sophomore season. This can ring especially true for a player coming off a demanding workload with the national team at the World Cup. However, Lee is unconcerned about the sophomore jinx.

“Other teams around the league have taken notice, and I will face stiffer defense in the upcoming season,” Lee said. “Having said that, I’ve experienced all these things with FC Seoul [of the K-League], so it won’t be a big concern for me. Even if I get off to a slow start and do not put up points out of the gate, I will not pressure myself.”

In order to improve and become a better player in the EPL, Lee thinks that it’s crucial for him to develop dribbling skills, which will allow him to excel in one-on-one situations. Coming off his first World Cup, Lee thinks the experience will help boost his confidence on the field.

Lee also sees a positive future ahead for the national team under its new manager Cho Kwang-rae, the former manager of Anyang Cheetahs and FC Seoul.

“Cho likes to employ a fast-paced offense based on solid passing work,” Lee said. “He will likely use more playmakers in his lineup. Football fans will enjoy his style of play, and it’s a positive step forward for Korean football.”